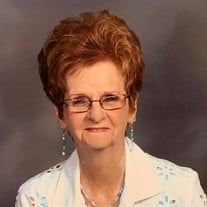 Joyce Edna Sanders Lumpkin, 90, of Orange, Texas. Joyce went to her Forever Heavenly Home on May 13, 2021 after a brief illness. A visitation for Joyce will be held at 1:30 p.m., Thursday, May 20, 2021 at Claybar Funeral Home in Orange with the service to follow at 3:00 p.m. Burial following at Forest Lawn Cemetery Joyce is survived by her daughter, Cindi Clanton and husband David ‘Bear’ Clanton, son, Scott Lumpkin and wife DeAnn, 5 grandchildren, Brooke Clanton Duhon and husband Brandon Duhon, David B. Clanton and wife Alexis, Candace Clanton Tottenham and fiancé Jeremy Rice, Byron Lumpkin, Staci Lumpkin McFarlane and husband Luke McFarlane; 8 great grandchildren, Bree Duhon, Braze Duhon, Will Clanton, Lily Clanton, Parker Tottenham, Lawson Tottenham, Noah McFarlane, Jonah McFarlane and numerous nephews, nieces, great & great-great nephews and great & great-great nieces. Worthy of mention are her sisters’ daughters, Kathy Jarnagin Combs and Karen Grubb Morgan. Joyce is preceded in death by her parents Pete & Pearl Sanders, beloved husband Bob Lumpkin, son Kyle Lumpkin, brothers K.C. Sanders, Thurston Sanders, Herman Sanders and Haskell Sanders, sisters Christine ‘Jerry’ Sanders Jarnagin and Dapha Sanders Grubb. Worthy of mention are her sisters’ children John Whitaker and Jan Jarnagin Johnson. Joyce was born on March 29, 1931 to Pete and Pearl Sanders in the rural community of Beckville, Texas. As the youngest child of a large family, she was spared many of the farm chores. And that suited Joyce just fine. A favorite family story is of a day when Joyce was discovered trying to rescue baby ducks from a nearby pond. At a young age, she discovered an escape into the big world through books. Shortly after completing elementary school, her family moved to Marshall, Texas and Joyce quickly acclimated to the sophistication of city life. She went on to graduate from Marshall High School and took business classes to qualify for clerical jobs. The business world was her niche. She met the love of her life, Bob Lumpkin, through a friend and married him on August 19, 1950. His work moved them to nearby Shreveport, Louisiana where their family quickly grew to five. Joyce spoke fondly and wistfully of Shreveport for many years. After several moves, the family finally landed in Orange, Texas in 1962. Joyce soon went to work at DuPont in Orange in secretarial positions before landing in payroll. This is where her career thrived and where she continued working for over 30 years. Orange is where she watched both her children and grandchildren grow up. The grandchildren look back at her life and feel the influence of her strength and resilience in their own lives. She and Bob introduced their children, friends of their children, and their grandchildren to a love of camping and lake life. Many memories of them are in a lakeside setting. Bob and Joyce also enjoyed dancing. At family reunions and wedding, attendees always stopped to watch their artful dancing partnership. Joyce was an avid reader. In fact, it was her only hobby. On the last morning of her earthly life, a book was her companion. She was a master at words and often wrote poems to family members on special occasions. Joyce relocated to Florence in 2011 with her daughter and son-in-law. She lived independently next door to them until she slipped quietly and peacefully into Heaven on the morning of May 13, 2021. Jesus had a place prepared for her. We like to think of her welcomed by those who have gone before and dancing once again with her Beloved Bob. Joyce was a Member of North Orange Baptist Church for over 50 years and a member of First Baptist Church Florence for 9 years. The family is joyful that her pastors from both of those churches will officiate her funeral.

Joyce Edna Sanders Lumpkin, 90, of Orange, Texas. Joyce went to her Forever Heavenly Home on May 13, 2021 after a brief illness. A visitation for Joyce will be held at 1:30 p.m., Thursday, May 20, 2021 at Claybar Funeral Home in Orange with... View Obituary & Service Information

The family of Joyce Edna Sanders Lumpkin created this Life Tributes page to make it easy to share your memories.

Send flowers to the Lumpkin family.