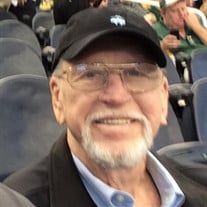 Joseph Henry Tanner “Bill” “Sleepy”, 88, of Beaumont, Texas, passed away on March 24, 2022, at, St. Elizabeth Hospital in Beaumont. A funeral service will be at 3:00 p.m., Tuesday, March 29, 2022, at Claybar Kelley-Watkins Funeral Home in Beaumont. Visitation will be held prior to the service, beginning at 1:00 p.m. Born in Beaumont, Texas, on May 21, 1933, he was the son of Henry “Red” Tanner and Mary Frances (McCormack) Tanner. Joseph was a member of the Catholic Church. Over the years, he attended St. Anne Catholic Church, St. Pius X Catholic Church, and St. Jude Thaddeus Catholic Church. He attended St. Anthony Catholic School and graduated in 1952. Afterwards, he was drafted in the United States Army during the Korean War. Joseph went on to work as a life insurance agent for many years. He enjoyed drinking coffee and meeting his friends at Dunkin’ Donuts and Dairy Queen. Joseph was a wonderful husband, father, grandfather, and brother who will be missed by all who knew and loved him. He was preceded in death by his wife, Nada Annette Tanner; his parents, Red and Mary Tanner; his siblings, Robert Tanner and Colleen Tanner; and his brothers-in-law, Percy Vincent and Raymond Guillory. He is survived by his sons, Carlton Tanner and wife Lauren of Dallas, and Wade Tanner of Beaumont; his stepdaughters, Susan Shirley of Beaumont and Tonya Kay Sauer of Palm Springs, Florida; his siblings, Pat Vincent, Catherine Trahan and husband Melvin, and Shirley Guillory, all of Beaumont; his grandchildren, Tobi Tanner, Kris Shirley, Amanda Shirley, Chelsea Bolding, David Campbell, and Chris Bloodworth; nine great-grandchildren; as well as sister-in-law, Pauline R. Tanner.

The family of Joseph Henry Tanner created this Life Tributes page to make it easy to share your memories.

Send flowers to the Tanner family.