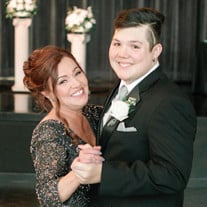 Shane Edgerly, 31, of Bridge City, passed away on December 12, 2021, in Beaumont. Visitation will be 5:00 p.m. until 8:00 p.m. Thursday, December 16, 2021, at Claybar Funeral Home in Bridge City. Funeral services will be held at 2:00 p.m. Friday, December 17, 2021, at Claybar Funeral Home in Bridge City with Pastor Kirk Ellender officiating. Interment will follow at Hillcrest Memorial Gardens. Pallbearers will be Shane Edgerly, Sr., Tanner Edgerly, Marc Edgerly, Michael Simon, Kevin Cormier, Nyron Rahaman and Shawn Cormier. Honorary Pallbearer is James Meguess. Born in Nederland, Texas, on June 20, 1990, he is the son of Daniel Shane Edgerly and Malisa Lee (McKnight) Edgerly. Shane worked as an Administrative Assistant for Ferguson Law Firm for more than 4 years. He enjoyed gaming, building computers, and was an avid gun collector. Shane was known for his heart of gold and making everyone feel loved. He was hard working, and no job was ever too big or small for him. From a young age, Shane was the perfect gentleman and his kind and gentle love won over Marlea, the love of his life. Shane loved all superheroes but especially Superman. He was baptized and saved at the age of 13 by Charles, his grandfather who adored him. Shane was a loving son and brother who impacted many lives. He will be dearly missed by those who know and love him. He was preceded in death by his grandparents, Sandra Tauzin, Mike Detrick and Daniel Edgerly; as well as his great grandparents, Ellen and A.J. Romero and Ruby and Grover Young. He is survived by his parents, Lisa and Shane Edgerly; grandparents, Sharron and Charles Chesson and Jimmy McKnight; his brother, Tanner Edgerly and wife Brittany; aunt and uncle, Debbie and James Meguess; uncles, Jimmy McKnight, Johnny McKnight, and Marc Edgerly; beloved girlfriend, Marlea Simon as well as her parents, Kristi and Mike Simon and her brother, Matthew Simon; cousins, Saryn Rogers, Raelynn Rogers, and Britton Dover, Shai McKnight, Katelyn Pyle, Jackson Calhoun, and Holly Paulos; and his extended family, Michelle and Chip Ferguson and Sharon Seal (Ms. Red).

The family of Joseph "Shane" Edgerly created this Life Tributes page to make it easy to share your memories.

Send flowers to the Edgerly family.