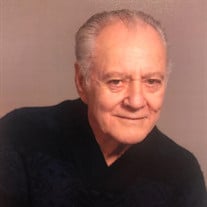 Joseph “Boo” Darrell Richard, 78, of Orange, passed away on December 24, 2021, in Orange. A Mass of Christian Burial will be 10:00 a.m., Thursday, December 30, 2021, at St. Francis Catholic Church in Orange. Officiating will be Father Sinclair Oubre. Burial will follow at St. Mary Cemetery in Orange. Visitation will be from 5:00 p.m. to 7:00 p.m., with a Vigil starting at 7:00 p.m., with Rosary to follow, Wednesday, December 29, 2021, at Claybar Funeral Home in Orange. Born in Church Point, Louisiana, on March 29, 1943, he was the son of Sidney Joseph Richard and Hilda (Cormier) Richard. Joseph was devout in his faith and served his Lord and Savior wholeheartedly. He served his country bravely in the Navy from 1963 to 1969 aboard the USS Franklin D. Roosevelt and the USS Kitty Hawk. Upon leaving his career with the Navy, Joseph was employed for 28 years with Texaco as an Electrician/Instrument Tech. He loved dancing, so much so, he won several awards for his country and western dancing. He had a loving heart and would do anything for those he loved. Joseph had a certain brutal honesty and was never afraid to tell you the truth, even if you didn’t want to hear it. He never met a stranger and could make friends wherever he went. Joseph was a one of a kind man and will be missed deeply by all who loved him. He was preceded in death by his parents, Sidney and Hilda Richard; brother, Bobby; and sisters, Betty and Jackie. He is survived by his loving wife who he shared 22 beautiful years with, Vickie Richard; children, Doyle Brady and wife Christie, Beth Flanigan and husband Jonathan, Sidney Richard and wife Aylssa, Joseph Richard, Jr., Darla Delome and husband Russsel; grandchildren, Tyren, Taygen, Tracyn, Paisley, Presley, Glen, Collin, Rustie, Brittney and Justin; great-grandchildren, Brayla, Ahmari, Tripp, Jacelyn, Coastal, Bentley, Antoine, Justin and Jameslee; along with siblings, Kermit Richard and wife Lynn, Charlene Andrapont and husband Leon and Cheryl Granger. Serving as pallbearers will be Nate Choate, Doyle Brady, Jonathan Flanigan, Gabe Choate, Philip Webb and Harold Hoffman.

The family of Joseph "Boo" Darrell Richard created this Life Tributes page to make it easy to share your memories.

Joseph “Boo” Darrell Richard, 78, of Orange, passed away on December...

Send flowers to the Richard family.