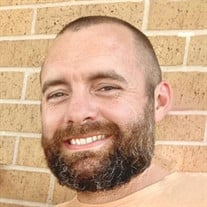 Beloved husband and father, Jordan Stevenson, 38, passed away on May 15, 2021 in Houston, Texas. Jordan was raised in Orange, Texas and was overjoyed to finally live in his hometown again. Funeral services will begin at 3:00 p.m. Visitation will be held prior to the funeral service from 1:00 p.m. to 2:00 p.m., Monday May 17, at Claybar Funeral Home in Orange, Texas. Burial will follow at Forest Lawn Cemetery in Orange, Texas. Born on April 17, and a proud 2001 graduate of West Orange Stark High School, Jordan was the epitome of a devoted father. While working full time and raising a family, Jordan managed to complete his Associates, Bachelors, and Master’s Degrees. His most recent and impressive endeavor was graduating with a Juris Doctor Degree from Florida A&M University College of Law. He looked forward to taking the Bar Exam in July and making a difference for underserved people in his hometown. Jordan had an exceptional intellect and wit so quick; most people needed to work to keep up. His inside jokes and doubled over belly laughs brought such life to every conversation. Jordan was fiercely loyal to those that he loved and spent every moment of his free time making life easier for his three girls. He is survived by his loving wife and best friend of nearly 17 years, Brittany Stevenson; his beloved daughters, Abigail Blythe Stevenson and Allison Bridan Stevenson, who he was so deeply proud of. He was preceded in death by his father, James “Jim” Stevenson, who he so admired. He modeled his fathering on the principles and love he saw within Jim. Jordan is survived by numerous other loving family and friends; mother, Susan Price Smith; sister, Chrissy Miller and family; mother-in-law, Lisa Barthelemy; his Nanny, Joe Ann Rose, sister-in-law, Leah Barthelemy; friends that were truly family in his eyes, Ransom Macfarlane, Rowdy Macfarlane, Carl Wayne Melancon, and John Phillips. Serving as pallbearers will be Ransom Macfarlane, Rowdy Macfarlane, John Phillips, Tommy Martin, Josh Schoggins, and Brandon Leblanc. Honorary pallbearers will be Carl Wayne Melancon, Jake Hollier, Ben Grimsley, Shelton Kelsey, and Dustin Williamson. Jordan chose to give the gift of life so that other families may get more time with those they hold dear, instead of the enduring the kind of loss that his family is now living. His light will continue to live on through those that knew him and those that now walk around with a small piece of him inside. In lieu of flowers, memorial contributions can be made to one of the fundraising pages seeking to support his family during this untimely and unexpected loss.

Beloved husband and father, Jordan Stevenson, 38, passed away on May 15, 2021 in Houston, Texas. Jordan was raised in Orange, Texas and was overjoyed to finally live in his hometown again. Funeral services will begin at 3:00 p.m. Visitation... View Obituary & Service Information

The family of Jordan William Stevenson created this Life Tributes page to make it easy to share your memories.

Send flowers to the Stevenson family.