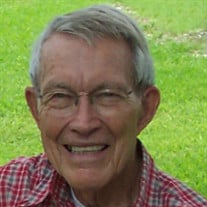 John Edward Scott, 93, of Beaumont, TX, passed away on April 22, 2021, at, Harbor Hospice, in Beaumont, TX. Funeral services will be 2:00 p.m., Monday, April 26, 2021, at Meadows Church of Christ in Beaumont, TX. Officiating will be Rick Walker and John Helbig. Cremation will be under the direction of Claybar Funeral Home. Born in Seymour, TX, on June 6, 1927, he was the son of William Roy Scott and Ola James (Buffington) Scott. John was an A&M Aggie through and through first graduating from Texas A&M with his bachelor’s degree in horticulture. He then went on to earn his master’s degree in agronomy and began his career as a dedicated agronomist at the Texas A&M Rice Research Extension Center, where he remained for 39 years. He spent many years working in the field of horticulture and agronomy becoming a rice breeder for the state of Texas. Along with his agricultural work he also served our country for 8 years in the United States Navy and was enlisted during WWII. John was very active in his church and served as a deacon for many years at Meadows Church of Christ, previously Ridgewood Church of Christ. He was able to do all of this with his loving wife by his side, having a beautiful journey of marriage. He will be dearly missed by those who knew and loved him. He was preceded in death by his parents, William Roy Scott and Ola James (Buffington) Scott; sister, Cristell Scott; and brother, Horace “Harby” Scott. He is survived by his loving wife of nearly 59 years, Elizabeth “Betty” Scott; daughters, Kathryn Townley and husband Mark of Lufkin, TX, and Kerry Helbig and husband John of Conroe, TX; grandchildren, Caleb Helbig, Claudia Helbig, and Sarah Townley; and brother, KQ Scott and wife Mary Frances of San Antonio, TX; and many nieces and nephews.

The family of John Edward Scott created this Life Tributes page to make it easy to share your memories.

Send flowers to the Scott family.