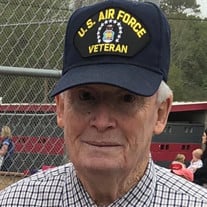 Jerry Duwayne “Shorty” Hussey, 80, of Buna, Texas, passed away on September 27, 2021, in Beaumont. Funeral services will be 2:00 p.m., Friday, October 1, at Mauriceville Baptist Church. Officiating will be Pastor Kevin Brown. Burial will follow at Antioch Cemetery in Buna. Visitation will be from 12:00 p.m. to 2:00 p.m., Friday, at Mauriceville Baptist Church. Born in Buna, Texas, on March 21, 1941, he was the son of Kenneth Hussey and Opal (Bond) Hussey. Jerry proudly and honorably served in the United States Air Force. Jerry retired from Alexandria, P.D. and came to Orange in 1990 where he met his loving wife, Glindia. He hired on for Orange County Sheriff’s Department where he was a detective and later went to work for the city of Pinehurst P.D. Jerry served as mayor for Pinehurst for 2 terms and was also a Mason and Shriner. He and his wife, Glindia were faithful members of Mauriceville Baptist Church. Jerry enjoyed restoring cars and traveling with his wife in their RV. He loved his family dearly and left an impact on many lives. Jerry was a loving husband, father, and grandfather who will be dearly missed by those who knew and loved him. He was preceded in death by his parents, Kenneth and Opal Hussey; daughter, Ann Marie Phillips; brothers, Joe Hussey and Bud Hussey. He is survived by his loving wife of 28 years, Glindia Hussey of Orange; children, Paula Strehle of Pineville, La and Suzette Hussey of Ball, La; stepdaughter, Brenda Peters, of Newton; 4 grandchildren; 4 great grandchildren; his main man, Easton Dishon who referred to him as sweet Papa; sister, Lavan Spencer; and numerous nieces, nephews, and other loving family and friends.

The family of Jerry Duwayne "Shorty" Hussey created this Life Tributes page to make it easy to share your memories.

Send flowers to the Hussey family.