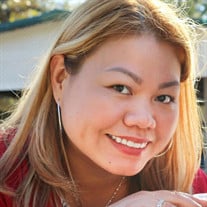 Jenny Mui Thanh Vong, 35, of Bridge City, passed away on Wednesday, August 18th, 2021. Funeral services (Cúng Cơm; Lễ Khiển Điện) will begin at 9:30 a.m., Thursday, August 26, 2021, at Claybar Funeral Home in Bridge City. Officiating will be Monk Minh Nhat of Quang Dien Temple in Bridge City. Burial ceremony (Hạ Huyệt) will follow at Hillcrest Memorial Gardens in Orange. Visitation will be Wednesday, August 25, 2021 9:00 a.m. to 8:00 p.m. with prayer times from 9:00 a.m. to 10:00 a.m (Liệm và Phát Tang; Cúng Cơm) and 4:00 p.m. to 5:00 p.m. (Lễ Tịch Điện). Born in Vietnam, on January 1st, 1985, she was the daughter of Kenh Vong and Kiu Tsan. Mui Thanh, more commonly known as Jenny, immigrated to America in her early twenties with her brother and mother. As a person, Jenny was known for her loud personality, and loving and caring nature. Her warmth will be greatly missed by her loved ones. Jenny and her husband, Kevin, began their family in 2011 when their first daughter, Kaylee, was born. Two years later in 2013, Kayden was born and completed the family of four. In 2012, Jenny and Kevin became, and continue to be, the owners of Vidor Nails. Vidor Nails and their customers have become the livelihood of Jenny, her husband, Kevin, and their family. She was preceded in death by her father, Kenh Vong. She is survived by her adoring husband, Hon (Kevin) Chong, and their loving children, Kaylee and Kayden Chong, of Bridge City; mother, Kiu Tsan of Bridge City; and her four brothers, Lam Thanh Vong, Khan Thanh Vong, Trau Thanh Vong, Hieu (Ben) Thanh Vong and three sisters, Lien Nhuc Vong, Mui Nhi Vong, Mui Si Vong, and nieces and nephews.

The family of Jenny Mui Thanh Vong created this Life Tributes page to make it easy to share your memories.

Send flowers to the Vong family.