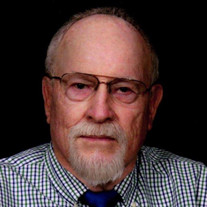 James Norton Turpin, 85, of Orange, Texas, passed away on March 30, 2021, at Harbor Hospice in Beaumont. Memorial service will be at 11:00 a.m., Saturday, April 3, 2021, at North Orange Baptist Church in Orange gymnasium. Officiating will be Lynn Ashcraft and Chip Anthony. Visitation will be at 10:00 a.m., Saturday, April 3, 2021, at North Orange Baptist Church in Orange. Cremation will be held under the direction of Claybar Funeral Home in Orange. His remains will return to the Blue Ridge Mountain town of Big Island, Virginia, population, 310, where he grew up and where his mother, father, and two older brothers are buried on a hill overlooking the Blue Ridge Mountains, the James River, and the paper mill where he began his career and proposed to Judy. He will rest where his life began surrounded by his family. Born in Lynchburg, Virginia on October 7, 1935, he was the youngest son of Thomas Raymond Turpin and Laura Louise (Norton) Turpin. None of his family had gone to college. From high school he worked at the paper mill (Owens-Illinois) for four years. Sensing his potential, paper mill executives strongly encouraged him to go to college. They supported him by offering work any time he was back in his hometown helping him pay his way. They made an offer, and he chose to return to paper mill after he graduated from Virginia Tech with a Building Construction Degree. He had worked enough days to accumulate a year of seniority in those four years at Tech. O-I eventually sent his family to Toledo, Ohio, Lufkin, Jasper, Toledo again, and Orange, Texas. Rather than move the family again and loving to be a Texan, he chose to leave O-I in 1980 to join Joe C. Norman Construction Company retiring in 2007. Jim was a very devout Christian and an active member of North Orange Baptist Church, serving as a deacon, volunteering as a Sunday school teacher, and was the chairman of the building committee when the church first moved from town. He also had many hobbies including golf, cooking/grilling, spending time in his garden growing vegetables, fruits and beautiful flowers, hunting, and he even enjoyed water skiing in the James River when he was younger. He loved to read the newspaper every day. He was an excellent grandpa to his grandchildren and a great father passing his faith to children and grandchildren. Jim was one of the most generous and kind men one could ever meet and will be missed by all that knew and loved him. He was preceded in death by his parents, Thomas Raymond Turpin and Laura Louise (Norton) Turpin; brothers, Tommy Turpin and Billy Turpin. He is survived by his loving wife of 58 years, Judy Turpin; children, James Mark Turpin and Florencio Vazquez of Austin, TX, and Cara Love and husband Joe of Orange TX; grandchildren, Trey Love and Travis Love; and numerous nieces, nephews, and cousins. In lieu of flowers, memorial contributions can be made to the North Orange Baptist Church Restoration Fund at https://nobcfamily.com/give/ to honor his longtime commitment to the building committee and help repair the damage caused by 2020 hurricanes. Please check NOBC’s Facebook page for a possible live stream. Mask wearing policy is left to the discretion of each attendee.

The family of James "Jim" Norton Turpin created this Life Tributes page to make it easy to share your memories.

James Norton Turpin, 85, of Orange, Texas, passed away on March...

Send flowers to the Turpin family.