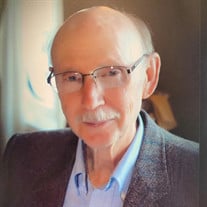 James Ferguson James “Jim” Ferguson, 74, of Beaumont, TX, passed away Wednesday, May 18, after battling a long illness. Jim was born in Brady, Texas, May 30, 1946 to Emmy and Marion Ferguson. A graduate of Port Neches-Groves High School, he received his BS degree from Lamar University where he was a member of Sigma Chi Fraternity. In that organization he made lifelong friends, some who later became avid golf and bridge partners. He worked in outside sales for much of his career, retiring from the Edward Don Company in 2014. His true passion was his family. He always put them first, never missing birthdays, holiday celebrations or myriad events for any loved one, but especially for his “daddy’s girl” daughter and his grandchildren whom he adored and who adore him. Jim enjoyed playing acoustic guitar and a good round of golf with friends. After retirement, he became an avid duplicate bridge player, spending many happy hours at the Beaumont Bridge Studio playing with Flo and making new friends. He is preceded in death by his parents, Emmy and Marion, “Fergie”, Ferguson. Those left to cherish his memory are his adoring wife of 43 years, Flo; his daughter, Sarah and husband Brandon Lee of Sour Lake; two grandchildren, Garrett and Emmy; two step-grandchildren, Sam and Libby; two sisters, Tish Ferguson of Beaumont, and Betty Ferguson and her husband Jim Matera of Golden, Colorado; brother-in-law, Tom Griffith and wife Lydia of Austin; and two nieces, Keri Hanicak and Rebecca Gordon. Jim will also be remembered by all who knew him as “the nicest man we know.” His family would like to thank the staff of the medical intensive care unit, St. Elizabeth Hospital, for the excellent and compassionate care given to Jim during his final days. A visitation will take place Saturday, May 22, 2021, from 2 p.m.-4 p.m., at Claybar Kelly-Watkins Funeral Home, 1155 N 11th Street, Beaumont, Texas. In lieu of flowers memorial contributions may be made to the Southeast Texas Food Bank or the charity of your choice.

James Ferguson James &#8220;Jim&#8221; Ferguson, 74, of Beaumont, TX, passed away Wednesday, May 18, after battling a long illness. Jim was born in Brady, Texas, May 30, 1946 to Emmy and Marion Ferguson. A graduate of Port Neches-Groves High... View Obituary & Service Information

The family of James "Jim" Ferguson created this Life Tributes page to make it easy to share your memories.

Send flowers to the Ferguson family.