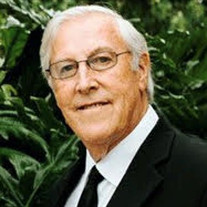 Jack Louis James, 72, of Bridge City, passed away peacefully on Thursday, March 18, 2021 surrounded by family. Funeral services will be 3:00 p.m., Sunday, March 28, 2021 at St. Paul United Methodist Church in Bridge City. Officiating will be Reverend Mark Bunch. Burial will follow at Hillcrest Memorial Gardens in Orange. Visitation will be held prior to the service from 2:00 p.m. to 3:00 p.m., at St. Paul United Methodist Church in Bridge City. Jack was born in Beaumont, Texas, on May 25, 1948 to Frank Burnis James Sr. and Alma (Alexander) James. He grew up in Kountze, Texas where he loved to go hunting with friends and family. After graduating from Kountze High School in 1966, he attended Lamar State College of Technology where he earned his Machinist degree. In 1969, he was drafted by the United States Army and served in the 25th Infantry Division in the Vietnam War. He met his wife, Janice, on March 1, 1969 when they were set up on a blind date by family. They were married on January 23, 1971 and shared many adventures during their years together. Jack and Janice both retired and spent their time traveling the country. They loved finding new places to visit, making new friends all along the way. Jack never knew a stranger; if he saw someone in need, he was always willing to lend a helping hand. He loved God and his church. He was a very active member of St. Paul United Methodist Church. If he wasn’t spending time with his family, you could find him on the golf course with friends. He loved his grandchildren more than anything, and he was an adored “Poppy” to so many more. If children were around you could bet that Poppy would be playing with them, wrestling on the floor, doing anything to get them to giggle. So much even, that they often had to be reminded to take a break, and on occasion even getting Poppy in trouble for getting the kids too rowdy. He was preceded in death by his parents, Frank Burnis James Sr. and Alma (Alexander) James. He is survived by his loving wife of 50 years, Janice James; Daughter, Jaclyn Phillips and husband David “Skipper” of Bridge City, TX; Son, Jason James and wife Mandie of Bryan, TX; Grandchildren, Brie Balsano and husband Stuart of Bridge City, TX, Chloe Phillips of Bridge City, TX, Hudson James of Bryan, TX, and Hamilton James of Bryan, TX; Sisters, Doris Ann Douglas and husband Bill, Margaret Botch and husband Nick; Brothers, Frank James Jr. and wife Evelyn, and John James and wife Melinda. He also leaves behind his beloved dog, Miley, his best friend and companion. In lieu of flowers, memorial contributions can be made to St. Paul United Methodist Church Prayer Garden.

The family of Jack Louis James created this Life Tributes page to make it easy to share your memories.

Send flowers to the James family.