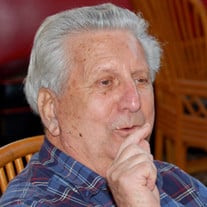 Harry Loyd Williams (89) passed away on Tuesday, September 7 at Calder Woods retirement facility in Beaumont, TX, after a long-fought battle with Alzheimer’s. Harry was born in Trinidad, TX in 1932 with a smile already on his face, no doubt. He was number five, out of six children born to Marion and James Williams. He graduated from Trinidad High School in 1949 and then worked as a lineman for the Texas Power and Light Company for a few years. Harry proudly served his country in the US Army, where he drove tanks in Germany from 1954-1956. After the army, Harry attended SFA in Nacogdoches, TX where he would go on to earn his BBA in 1958. He also achieved a Masters in Guidance and Counseling (MEd) from Lamar University in 1972. While attending SFA, Harry waited tables at Nance’s Cafe and met his future wife Carolyn Ann Matchett at a weekly dance. Harry and Ann were married on February 1, 1957 and became the proud parents of two daughters; Linda Kay Williams, in February of 1958, and Laura Leigh Williams, in November of 1961. After college, Harry taught junior high science for 2 years in Groves, TX at Port Neches Groves ISD. Harry then turned to his proclivity for computer science and worked in data processing and programming for the Gulf Oil Company in Port Arthur, TX and then for Texas Instruments in Dallas, TX. Harry also taught business data processing and computer programming at Lamar University, where he worked for 26 years. He eventually retired from Lamar in 1996 as Director of Student Affairs. In his retirement, Harry was a man of many hobbies and three primary names: Harry, Daddy and Pampaw. He was a happy handy man and he loved watching football, camping, drinking coffee, eating ice cream, playing dominoes and card games, entertaining his grandkids and going on RV trips with Ann. Harry always enjoyed helping others and being a part of his community. He was very active in the United Methodist Church at both the local and district levels. He was a regular volunteer at Some Other Place in Beaumont and was also affiliated with the Beaumont Bible Church for the past 10 years. Harry was always quick with one-liners and jokes, and any time spent with him was always ripe with joy and laughter. He will always be remembered as the kind, generous, loving, supportive, happy, funny family man that he was. Harry was preceded in death by his parents Marion McCool Williams and James Melton Williams; as well as his siblings Charles W. Williams, Betty Jean Williams Matthews Inmon, and James A Williams. Harry is survived by his wife of 64 years, Ann Matchett Williams, his brother Robert Wayne Williams (Jan), his sister Geraldine Williams Scroggins and his two daughters; Laura Leigh Cooper (Jeffrey) and Linda Kay Timaeus (Dana). He is also survived by 6 grand-children and 4 great-grandchildren. Memorial services for Harry will be held on Tuesday, September 14, 2021 at 2:00 p.m. at Wesley United Methodist Church in Beaumont, TX. Visitation will precede the service from 12:00 - 1:30 in the parlor. In lieu of flowers, memorial contributions can be made to Some Other Place in Beaumont, TX and the Alzheimer’s Association.

Harry Loyd Williams (89) passed away on Tuesday, September 7 at Calder Woods retirement facility in Beaumont, TX, after a long-fought battle with Alzheimer&#8217;s. Harry was born in Trinidad, TX in 1932 with a smile already on his face, no... View Obituary & Service Information

The family of Harry Loyd Williams created this Life Tributes page to make it easy to share your memories.

Send flowers to the Williams family.