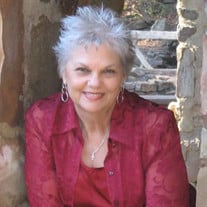 Gloria Nell Sartin Armentor February 3, 1951 – September 20, 2021 Gloria Nell Sartin Armentor, 70 of Kountze, Texas passed away on September 20, 2021. She was born February 3, 1951 in Port Arthur, Texas to Douglas and Mary (Morgan) Sartin. She is survived by her husband Glenn Armentor of Kountze, Texas; sister Susan Isaac of Beaumont, Texas; daughter Jamie Laughlin of Searcy, Arkansas; son Jason Soileau (Shelly) of Kountze, Texas; stepson Zachary Armentor and stepdaughter Lacy (Logan) Winslow of Santa Fe, Texas; Grandchildren: Hanah Laughlin of Searcy, Arkansas; Grant Soileau of Pt. Canaveral, Florida; Madison (Lane) Millican of Beaumont, Texas. Great-grandchildren: Emma Stump and Michael Watkins of Searcy, Arkansas; William Millican of Beaumont, Texas. Waiting in Heaven are her parents and her son-in-law, Nathan Laughlin. Gloria graduated from Thomas Jefferson High School, Port Arthur in 1969; University of Houston in 1993 with a degree in Hotel/Restaurant Management. She retired from Baker Hughes Centrilift in 2012. She called many places “home” in her life. Texas: Pt. Arthur, Griffing Park, Kountze, West Columbia, Bay City, Houston, Pasadena. Phoenix, AZ. Baton Rouge and Shreveport, LA. She loved a good adventure and enjoyed camping, fresh and saltwater fishing, scuba diving, horseback riding, traveling, motorcycling, good music and dancing. She could even fly an airplane. She was an avid seamstress. When her kids were young, she made most of their clothes herself. She would hand embroider “c’est bon” on the jeans she made to “give them a designer label”. She would can anything that grew in the garden; made homemade soap and crocheted a basket of fruits and vegetables for the kitchen table. She was happiest spending time with her family. She had a laugh that would carry through any room she was in. She loved to gather and cook in the kitchen. Most of all, she loved being Mom and G.G. (Grandma Gloria). She always had a pet whether dogs, cats, birds, fish or turtles. Her dogs Abbie and Gus will miss her terribly. Her wishes were to have a Celebration of Life which will be held privately. In lieu of flowers please send donations to Alzheimer’s Association. Or, pay it forward in her memory: buy a stranger’s meal, pay for someone’s groceries, plant a tree. Donation acknowledgements may be sent to Jamie Laughlin, Director of Volunteer Services 3214 East Race Avenue, Searcy, AR 72143.

The family of Gloria Nell Sartin Armentor created this Life Tributes page to make it easy to share your memories.