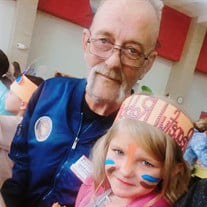 Glenn Darrell Snipes, 58, of Orange, passed away January 7, 2022, in Beaumont. A graveside service will be 1:00 p.m., Tuesday, January 25, at Hillcrest Memorial Gardens Cemetery in Orange. Officiating will be Jonathan Snipes. Born in New Orleans, Louisiana, on May 16, 1963, he was the son of Cleo Snipes and Jessie Snipes. Glenn worked as a Lieutenant for TDCJ for many years. He was a jack of all trades and loved working on anything he could get his hands on. Glenn was very strong willed and never left words unsaid. Family was number one and he enjoyed spending time with them as much as he could. Glenn left an impact on many lives and will be dearly missed by those who knew and loved him. He was preceded in death by his parents, Cleo and Jessie Snipes; brothers, Carl Snipes and Frank Snipes; as well as his grandson, Glenn Christopher Townsend. He is survived by his children, Nicole Snipes of Panama City Florida, Justin Snipes and wife Briana of Lumberton, and Sabrina Snipes of Orange; grandchildren, Dylan Roberts, Christopher Snipes, Christian Snipes, Trent Snipes, Blayne Snipes, Evelynn Snipes, Austin Snipes, and Holden Snipes.

The family of Glenn Darrell Snipes created this Life Tributes page to make it easy to share your memories.

Send flowers to the Snipes family.