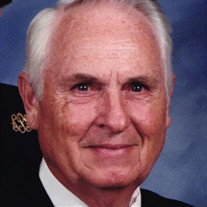 George Reginald Parker, 90, of Orange, peacefully passed through the gates of heaven on April 11, 2021, at his home in Orange, with his loving wife Shirley by his side. A mass of Christian burial will be held at 10:00 a.m., Saturday, April 17, 2021, at St. Francis of Assisi Catholic Church in Orange. Officiating will be Reverend Tom Phelan. Burial will follow at St. Mary Cemetery in Orange. Visitation will be from 5:00 p.m. to 8:00 p.m., Friday, April 16, 2021 including a vigil at 6:30 p.m. and a rosary at 7:00 p.m., at St. Francis of Assisi Catholic Church in Orange. Born in Suffolk, Virginia, on September 2, 1930, he was the son of George William Parker and Edna Lee Parker. He was raised on the family’s peanut farm, one of eight children. He later enrolled in Virginia Military Institute (VMI) and then enlisted in the US Air Force. He served from 1950-1954 in Operations, stationed in Germany during the Korean War. Following his return, he enrolled in VPI (Virginia Polytechnical Institute, which later became Virginia Tech University) and studied Civil Engineering. He met his future wife Shirley Saunders on a blind date in Richmond, Virginia. They married in August 1955 and made their first home in Radford, Virginia. They later moved to Roanoke and started their family. He began a career long employment with US Steel as a structural design draftsman in the engineering department, which led him to relocate his family several times. After a short time in Norfolk, Virginia he transferred to Birmingham, Alabama and finally to Orange, Texas in 1971 where he eventually retired. He was a member of the Knights of Columbus and loved spending most of his time surrounded by his family and his church. As an avid golfer, his retirement life consisted of many rounds of golf at D.E.R.A. and later at Sunset Country Club with his buddies “The Herd”. He was preceded in death by his parents George and Edna Lee Parker, and his seven siblings: Ophelia, Susie Lee, Florence, Marie, Anne, Preston and Clinton. He is survived by his beautiful wife of 65 years Shirley Saunders Parker of Orange, Texas; his son George Reginald Parker, Jr. and his wife Deborah of Bryan, Texas and their children Amber Dittfurth (husband Joseph Dittfurth) and Christian Parker (wife Marina Parker); his daughter Anne Parker Chen and her husband Frank of Orange, Texas and their children Amy Babcock (husband Justin Babcock), Michael Chen and Grace Chen; his daughter Lucy Parker Terry and her husband D.D. of Orange, Texas and their children Callie Perry (husband Elliott Perry) and Corrie Terry; his son Calvin Parker and his wife Suzette of Orange, Texas and their children Jordan Harmon (husband Jordan Harmon), Reagan Parker and Cameron Parker; and his son Stanford Parker and his wife Amy of Kingwood, Texas and their children Carson Parker and Cooper Parker. As much as he loved his grandchildren, he was especially proud of his eight great grandchildren: Emma, Rebecca and James Dittfurth, Colette Parker, Bear Jia-Fwu Babcock, Gracelynn and Tinley Perry, and Evelyn Harmon. Serving as pallbearers will be Christian Parker, Michael Chen, Cameron Parker, Cooper Parker, D.D. Terry, and Frank Chen. Honorary pallbearers are members of “The Herd”; Harold McDonald, Alvin Wright, Larry Bourliea and Wayne Brent. In lieu of flowers, memorial contributions can be made to the St. Francis of Assisi Knights of Columbus Council #13825.

George Reginald Parker, 90, of Orange, peacefully passed through the gates of heaven on April 11, 2021, at his home in Orange, with his loving wife Shirley by his side. A mass of Christian burial will be held at 10:00 a.m., Saturday, April... View Obituary & Service Information

The family of George Reginald Parker created this Life Tributes page to make it easy to share your memories.

Send flowers to the Parker family.