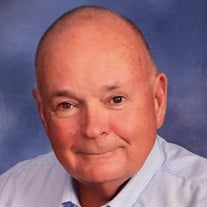 Franklin Augustus (Gus) Harris, Jr., 77, of Orange, passed away on October 18, 2021, in Beaumont. Funeral services will be 11:00 a.m., Friday, October 22, 2021, at Faith United Methodist Church in Orange. Officiating will be Reverend Valerie Sansing and Reverend Keith Tilley. Burial will follow at Hillcrest Memorial Gardens in Orange. Visitation will be from 5:00 p.m. to 7:00 p.m., Thursday, October 21, 2021, at Claybar Funeral Home in Orange. Born in Orange, Texas, on April 7, 1944, Gus was the son of Franklin Harris, Sr. and Katye Mae (Smith) Harris. From a young age, Gus was a member of the Orange County Sheriff Posse. He married Sue, whom he met on a blind date, and together they built a beautiful life full of service and compassion for 53 wonderful years. One of Gus and Sue’s favorite things to do was to travel to Colorado, taking their two young boys along where they would camp in the national forest campgrounds and off-road/Jeeped their favorite mountain passes around Creede, Silverton and Ouray. Gus faithfully served his Lord as an active member of Faith United Methodist Church. He graduated from Lutcher Stark High School in 1962 and Texas A&M in 1966 with a degree is Mechanical Engineering. In his most infamous “claim to fame”, Gus and his Corps buddies facilitated the procurement of The University of Texas’ mascot, Bevo, from his poorly guarded compound, escorting the longhorn back to parade in Texas A&M’s Corps of Cadet’s Quad. Thankfully no cattle or college students were harmed in this escapade and Gus only sustained a 2-week academic probation. Gus began his successful career as an engineer at DuPont, in which he would remain for close to 40 years before retiring. In addition to his hard work at DuPont he served on the Board of Spindletop, formally MHMR, for over 40 years. He also served on the Texas Council Risk Management Fund. Upon his retirement from DuPont, Gus went to work for the Nelda C. & H.J. Lutcher Stark Foundation, acting as the liason between the Stark Foundation and the contractors that would build a community-favorite attraction, known to many as Shangri La. He served as Chief Properties Officer for the Stark Foundation, which would play an instrumental role in Orange community’s growth. Among his many ventures and services, farming with his brother, Dan, held a special place in his heart. Together they owned and operated Harris Farms and Farmer’s Mercantile, a pilar of our community for nearly a century. Gus was one to never shy away from hard work. Many remember him for his humble heart, calm demeanor, and humerous wit. Everyone was drawn to him, and if he entered a room, it immediately lit up. He earned the respect of many in the community, through patience, problem solving, dedication, and willingness to keep going, even if the circumstances were strenuous. Among his many titles, “PaPa” was his absolute favorite. He adored his three grandchildren wholeheartedly and formed a special bond and connection with each of them. They learned so much through his “teacher’s heart”, making sure to teach a lesson out of anything that arose. Gus left an impact on all those he met, but most importantly made an everlasting difference in our community that Orange will benefit from for years to come. He will forever be cherished in the hearts of all those who loved him. He was preceded in death by his parents, Franklin Sr. and Katye Mae Harris; and grandparents, Franklin Augustus Harris, Esther Ruth Hilliard Harris, Columbus Lee Smith, and Mattie May Richards Smith. He is survived by his loving wife, Sue Harris; sons, Franklin Lee Harris and his wife Jamia Harris and Scott Alan Harris; grandchildren, Carl Benjamin Harris, John Carson Harris and William Franklin Harris, brother, Dan Harris, Jr. and his wife Lue Harris and numerous nieces and nephews. In lieu of flowers, memorial contributions may be made to Faith United Methodist Church at PO BOX 494 Orange, Texas, 77631 or the Texas Aggie Corps of Cadets Association. Please make checks payable to the CCA, write in memory of Gus Harris ‘66 in the memo, and mail to CCA, 1134 Finfeather Rd., Bryan, Texas, 77803 or go online to: Corpsofcadets.org/memory.

The family of Franklin Augustus (Gus) Harris, Jr. created this Life Tributes page to make it easy to share your memories.