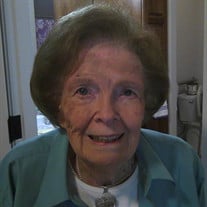 Frances Hanks passed away on August 22, 2021, surrounded by her family at Calder Woods, Beaumont, Texas, two days before her 96th birthday. Frances was born on August 24, 1925, in Baton Rouge Louisiana, to W. D. Fugler Sr. and Lucille Guy Fugler. She was a child during the Great Depression and had many stories about growing up with parents who could make something wonderful out of very little. She graduated from Baton Rouge High School and attended LSU. After World War II she worked at the Louisiana State Capitol Annex with a state program to aid Louisiana veterans. On February 24, 1949, she married L. D. “Sonny” Hanks Jr. in Baton Rouge, Louisiana. She was a devoted mother and wife and was involved in many activities for her daughters. She was a Blue Bird leader, Room Mother volunteer at her daughters’ school, made great Halloween costumes, and sewed many outfits for dance recitals. The Hanks family moved to Beaumont in 1961. Frances was a member of the Beaumont Women’s Club, and volunteered with the Baptist Hospital Auxiliary, where she served as president. She was a member of the Beaumont First Baptist Church for over 60 years and was active in the Brown Bag Bible Study Group. She enjoyed traveling, and later in life traveled with her siblings to Ireland, England, and Central America. She was preceded in death by her husband, her parents, brothers W.D, “Doug” Fugler Jr. and John Fugler, brother-in-law Gerald Reynolds, sister-in-law Camille Fugler, and nephew Doug Fugler. She is survived by her sister Miner Reynolds, of Collierville, TN; sister-in-law Patricia Fugler of Humble, TX; daughters Anita Cater and husband Dr. Bob Cater of Gatesville, TX, and Nancy Myska and husband Glen Myska of Richmond, TX; grandchildren Mason Myska and wife Stephanie of Round Rock, TX, Tyler Myska and wife Gabrielle of Richmond, TX. She is also survived by her great grandchildren Samuel, Alexandria, Joshua, and Brooklyn of Round Rock, Texas; nieces Madelyn Bourgeois, Beth Jasper, Gerrie Jernigan, Jill Phillips, and Kim Reed; many grandnieces, grandnephews, great grandnieces and great grandnephews. She is also survived by wonderful friends Camarie Kear, Rev. John Wagner, and Cyndy Wedekind. They were her jewels. There will be a private service. In lieu of flowers, contributions in the memory of Frances Hanks may be made to the First Baptist Church of Beaumont, 3739 N. Major Dr., Beaumont, TX, 77707.

The family of Frances Hanks created this Life Tributes page to make it easy to share your memories.

Send flowers to the Hanks family.