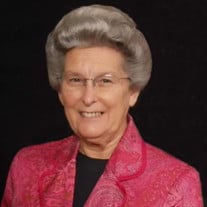 Evelyn Pauline Livingston Stark was born on February 11, 1929, in Merryville, Louisiana, to Maudie C. Mysell and Floyd Everitt Livingston. She grew up in Merryville and had several part-time jobs as a teenager. One of the most memorable was when she helped her father gather pulpwood in the woods for him to sell to the paper-making industry. After graduating from high school, she moved to Beaumont. It was here that she met Jesse E. Stark, Jr., at the First Pentecostal Church on Pope Street. They were married on July 2, 1949, and were married for almost 60 years until his death on June 9, 2009. Evelyn’s working career in Beaumont was as a secretary, first, at an insurance agency, then at the Beaumont Chamber of Commerce, secretary to Rev. Marvin L. Cole at The Apostolic Church of Beaumont, and finally as a secretary at Manning’s School Supply. Evelyn was a member of The Apostolic Church of Beaumont for more than 50 years. Evelyn’s hobbies included sewing, crocheting, camping and deer hunting, fishing, gardening, canning, growing flowers. She was a vital part of the Seniors Team who worked together in many fund-raising projects to build the new Apostolic Church building on Eastex Freeway in the mid 1990s. Evelyn did quality work, and every endeavor was completed to perfection. She was a friend to many and was known as “Auntie” to more than just her nieces and nephews. She is preceded in death by her husband, J.E. Stark, her parents, and her sister, Faye Hickman. She is survived by her daughter, Karen S. Hughes (Randy); grandchildren, Scott Hughes (Erica); Lauren Sartin (Justin); great grandchildren, Kenadie, Jackson, Sophie, Seth; brother, W.C. “Bill” Livingston; sisters, Lucille McManus, and Mary Jordan (Rev. Lonnie), and a host of friends and extended family who loved her. Visitation will be Saturday, February 19, 2022, from 10:00 AM to 11:00 AM at The Apostolic Church of Beaumont, 3333 Eastex Freeway. The Celebration of Life service will be at 11:00 AM at the Church. Burial will be at Davis Cemetery near Bon Wier in Newton County at approximately 3:00 PM. Funeral arrangements are under the direction of Claybar Kelley-Watkins Funeral Home, Beaumont. “Well done, thou good and faithful servant.”

Evelyn Pauline Livingston Stark was born on February 11, 1929, in Merryville, Louisiana, to Maudie C. Mysell and Floyd Everitt Livingston. She grew up in Merryville and had several part-time jobs as a teenager. One of the most memorable was... View Obituary & Service Information

The family of Evelyn Pauline Livingston Stark created this Life Tributes page to make it easy to share your memories.

Send flowers to the Stark family.