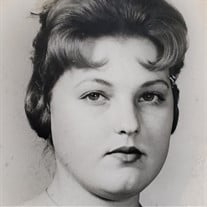 Evelyn Morris, of Deweyville, passed away peacefully on Friday, February 18, 2022 surrounded by her loving family. Funeral services will be 10:00 a.m., Saturday, February 26, 2022, at Claybar Funeral Home in Orange. Officiating will be John Fortenberry and Jeff Bell. Burial will follow at Evergreen Cemetery in Orange. Visitation will be from 5:00 to 8:00 p.m., Friday, at Claybar Funeral Home in Orange. Evelyn was born to Charlie and Dorothy (Weinbrenner) Croker on November 22, 1942 in Orange, Texas. She graduated from Bridge City High School in 1961 and shortly thereafter married Tommy Ray Morris on November 25, 1961. They spent many happy years together raising three children. Evelyn worked as a bus driver and teacher’s aid at Deweyville ISD and later became a manager of Body Expressions. She was also a meticulous housekeeper. She was of strong Christian faith and a faithful member of Calvary Baptist Church in Deweyville. She met no stranger and always offered a kind word or prayer. She will be missed by all who knew her. Evelyn was preceeded in death by her parents, sister, Elizabeth “Tunie” White, and brother, C.W. “Shy” Croaker. Those left to cherish her memory are her loving husband of 60 years, Tommy Morris and her children; Rusty Morris and wife Traci of Orange, Charlena “Nina” Ward and husband Mike of Mauriceville, Drew Morris of Little Cypress. She is also survived by 6 grandchildren (Josh, Mark, John, Justin, Tyler and Drake) and 6 great-grandchildren (Cayden, Knox, River, Harper, Scarlett, Jax and one on the way.) She is also survived by her brother William “Billy” Croker.

Evelyn Morris, of Deweyville, passed away peacefully on Friday, February 18, 2022 surrounded by her loving family. Funeral services will be 10:00 a.m., Saturday, February 26, 2022, at Claybar Funeral Home in Orange. Officiating will be John... View Obituary & Service Information

The family of Evelyn Morris created this Life Tributes page to make it easy to share your memories.

Evelyn Morris, of Deweyville, passed away peacefully on Friday,...

Send flowers to the Morris family.