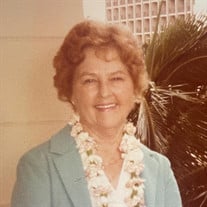 Estella Modenia Perkins, 105, formerly of Hwy 105, Beaumont, Texas, passed away on December 21, 2021 in Georgetown, Texas, where she had been living for the past 2 ½ years with her daughter, Nita Campbell, at Parker Dr. Funeral services will be 1:00pm, January 10, 2022, at Claybar Kelley-Watkins Funeral Home in Beaumont, Texas. Officiating will be Russ Bowman of Northwest Church of Christ in Beaumont. Burial will follow at Forest Lawn Cemetery in Beaumont, Texas. Visitation will be from 10:00am, January 10, 2022, at Claybar Kelley-Watkins Funeral Home in Beaumont, Texas. Born in Colbert County, Tuscumbia, Alabama on September 24, 1916, she was the daughter of Richard Luther Tompkins and Myrtle Alice James. She came from a small town in rural Alabama and witnessed history from the horse-and-buggy days, to seeing a man on the moon, and eventually using a Google Mini in her later years. As a young girl, she loved music and dancing. In the late 20’s, she and her sisters sang harmony on the local radio station. She met and married Leon “Red” Perkins, a pipefitter who eventually came to Texas and joined Pipefitters Local 195. They moved around the southeast United States following the jobs and settled in Beaumont in the 50’s. She worked at the J&J Restaurant, The Ridgewood Restaurant, and later at American Health Foods. Her greatest passion in life was her grandchildren and later, great-grandchildren and great-great-grandchildren. Her hobby was oil painting and she was an accomplished artist until her sight failed at th age of 95. She continued to live in the house built by her husband of 63 years until she went to assisted living. She was preceded in death by her husband, Leon Perkins of Beaumont; her parents, Richard and Myrtle Tompkins of Tuscumbia; her brother, Raymond Luther Tompkins and wife Rowena Tuscumbia; her brother, Robert Pride Tompkins and wife Katy; her sister, Doris Juanita Williford of Florence, AL; her sister, Billie Sue and husband Claude Richard Lindsey of Muscle Shoals, AL. She is survived by her daughter, Susan Elaine and husband Archie O’Neal Brown of Sour Lake; her daughter, Juantita Irene Campbell of Georgetown; her grandson, Ray E. Andrus of Beaumont; granddaughter, Candace E. Adkins of Georgetown; grandson, Erik Wayne Yeargan and wife Kathrine of Georgetown; granddaughter, Sandra Gay and husband Edward James Romero of Kirbyville; grandson, Scott David Campbell and wife Leslie of Austin; grandson, James O’Neal Brown of Orange City, FL; great-grandson, Daniel Ray Andrus of Beaumont; great-grandson, Justin Grey Andrus and wife Amber Rachalle of Mauriceville; great-granddaughter, Jessica Fatih Andrus of Vidor; great-grandson, Griffin Andrus Akins of Georgetown; great-grandsons, Alexandre Leon Yeargan and Sebastian Noel Yeargan of Canada, and Adrien Nathan Yeargan of Georgetown; great-great grandson, Corbin Stellar Andrus of Woodlands; great-great granddaughter, Sydney Rae Smith; great-great grandson, Jax Corbyn Nelson and great-great granddaughter, Lauren Elaine Andrus of Mauriceville; great-great grandson, Levi O’Neal Ratcliff of Vidor; and numerous nieces and nephews and great-nieces and great-nephews. In lieu of flowers, memorial contributions can be made to the Cystic Fibrosis Foundation.

Estella Modenia Perkins, 105, formerly of Hwy 105, Beaumont, Texas, passed away on December 21, 2021 in Georgetown, Texas, where she had been living for the past 2 ½ years with her daughter, Nita Campbell, at Parker Dr. Funeral services will... View Obituary & Service Information

The family of Estella M. Perkins created this Life Tributes page to make it easy to share your memories.

Send flowers to the Perkins family.