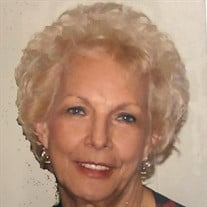 Emma Dale Nelms, 83 of Vidor, passed away on September 19, 2021, in Beaumont. Funeral services will be 3:00 p.m., Wednesday, September 22, at Claybar Funeral Home in Orange. Officiating will be Reverend Philip Reed. Burial will follow at King Cemetery. The family will be having food for anyone who would like to join them at Calvary Baptist Church in Deweyville following the burial. Visitation will be from 5:00 p.m. to 8:00 p.m., Tuesday, at Claybar Funeral Home in Orange. Born in Gilmer, Texas on June 7, 1938, she was the daughter of Cleo Coulter and Ima (Dean) Coulter. Emma was the middle child of all 10 children. Larry Baker, Sr. brought all of them to Orange, Texas in 1950. Emma began working at Second St. News Stand when she was just 13 years old. When she went to work for Atty R. Lee Davis, she thought she had hit big time. Before they even broke ground for Owens Illinois Paper Mill, she was hired as a clerk. Emma eventually became the first female supervisor in operations when she ran the service crew. After moving to storeroom manager and on to purchasing manager she retired after 40 years of the work she so dearly loved. Emma was married to Elwood Boulet form August 16, 1957, to his passing in September 1984. She then married Doug Nelms on June 14, 1985, and she lost him to death in January 2006. Together she had 3 children and 3 stepchildren. She was preceded in death by her loving husbands, Elwood Boulet and Doug Nelms; parents, Cleo and Ima Coulter; and children, Thomas Richard “Ricky” Boulet and Felecia Nelms Johnson. She is survived by Judi Ruth Boulet, Carl Allen Johnson, Rhonda Boulet Butler and husband Myron, Gary Douglas Nelms and wife Cindy, Regina Boulet Fling Peddy and husband Danny, Cody Jason Nelms and wife Cassie; grandchildren, Colby and Risa Nelms, Calida and Josh Dunnehoo, Ashley and Robbie Garrett, Nicholas and Leisha Johnson, Mahlon and Heather Butler, Cole and Aimee Nelms, Cord and Shelby Fling, Callie and Donavon Weldon, Tucker Peddy, and Rhett Peddy; 10 great grandchildren. She was beloved by all of her family, sister, nieces, nephews, and cousins from the Boulets, Nelms, Coulters, and Deans. Serving as pallbearers will be Mahlon Butler, Cord Fling, Cody Nelms, Larry Baker, Jr., John Wilson, Glenn Stephenson, Stephen Gibson, Josh Dunnerhoo, and Jimmy Coulter. Honorary pallbearers are Dean Peery, Robbie Wohler, Rusty Baker, Ronnie Walton, Kenneth Wahl, and Kenneth Dorman. In lieu of flowers, memorial contributions can be made to Tunnel to Towers Foundation.

Emma Dale Nelms, 83 of Vidor, passed away on September 19, 2021, in Beaumont. Funeral services will be 3:00 p.m., Wednesday, September 22, at Claybar Funeral Home in Orange. Officiating will be Reverend Philip Reed. Burial will follow at King... View Obituary & Service Information

The family of Emma Dale Nelms created this Life Tributes page to make it easy to share your memories.

Send flowers to the Nelms family.