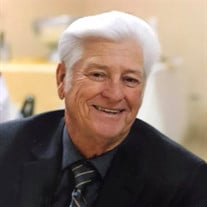 Edward Hutchins, 86, of Bridge City, passed away on March 31, 2022, at Harbor Hospice in Beaumont. Funeral services will be 11:00 a.m., Wednesday, April 6, 2022, at Parkway Life Church in Lumberton, the family will receive friends beginning at 10:00 a.m. Officiating will be Reverend Nathan Keating. A graveside service will be 2:30 p.m., at Peebles Cemetery in Goodrich, Texas. Visitation will be from 5:00 to 7:00 p.m., Tuesday, at Claybar Funeral Home in Bridge City. Edward Oliver Cowen was born March 10, 1936, in Buffalo, TX, and passed away on March 31, 2022 in Beaumont, TX. Yes, you read that right, Edward Cowen. Ed was raised by his mother and stepfather Ruth and Earlie Hutchins, along with his loving siblings Gene, Earlie, and Kathy. At the age of 18, his name was legally changed to Edward Hutchins. After years of longing, at the age of 26, Ed finally met his father and stepmother, Oliver and Auda Cowen, and siblings Dennis, Jerry, Theresa and Cindy. He was welcomed into the family and they have always remained close. Ed graduated from Chester High School in 1954. He had two wonderful boys, Bruce and Greg. In 1976, he married Cathy and two years later his only daughter, his baby girl, the apple of his eye, Keri, entered this world. He began his career at Gulf States Utilities which later became Entergy. His work ethic and character catapulted him from the Appliance Repair Department to a System Operator and on to District Superintendent of the Mid County office in Port Neches and later District Manager of Orange County. After 39 years, he took early retirement and was honored with a formal proclamation by the Mayor proclaiming it “Ed Hutchins Day” in the City of Orange. He was very active in the communities of Port Neches and Orange. In both cities, he served as President of the Chamber of Commerce and also served one year as Co-Chairman of the Annual Pow Wow Festival. He was also a long-standing Rotary Club member serving one year as President and was honored with the Paul Harris Fellow Award. Ed was preceded in death by his son, Thomas Gregory Hutchins, who passed away unexpectedly December 30, 2021 while Ed was still in a Houston hospital. We were not able to tell Ed of his passing. Oh, what a surprise reunion they must have had! He was also preceded in death by his mother and stepfather, Ruth & Earlie Hutchins, his father and stepmother, Oliver and Auda Cowen, brothers, Gene Hutchins, Earlie Hutchins, Dennis Cowen and sister, Theresa Cowen Hermes. He is survived by his wife of 45 years, Cathy Hutchins, son, Bruce Hutchins and wife Rosalyn, daughter, Keri Michutka Curd and husband, John Curd, granddaughters and spouses, Holly and Trey Brocato, Pamela and Kyle Hoffman, grandsons, Matthew Curd and Keaton Michutka, and great grandchildren, Charlie and Gentry Brocato. He is also survived by his sister Kathy Hutchins Burroughs, brother, Jerry Cowen and sister, Cindy Cowen Porter and lots of nieces and nephews. He had a passion for fishing the lakes of Texas. Whether it was bass, stripers or hybrids, he loved fishing with his boys. White bass fishing at Lake Livingston was his favorite. He also enjoyed playing golf and loved the opportunity to play on the beautiful courses in San Diego, especially Torrey Pines. When it came to family, there was no doubt where he stood. His deep love for each one of them was evident in all that he did. But nothing could put a bigger smile on his face than his grandkids Holly, Pamela, and Keaton! When the girls married, he was blessed with two wonderful grandsons, Trey and Kyle, and two great-grandchildren, Charlie and Gentry! And of course, we can’t forget his granddogs, Bailey and Parker. He knew he was one blessed Papaw! His bond with Keaton was extra special due to quality time spent with Papaw as Keri went back to work. From preschool to middle school, Keaton spent every day after school making memories and bonding with his Pops and Nana who treasured every moment of being a part of his life! Ed was a quiet man, but a man with much wisdom. When he spoke, people listened. Gentle, loving, kind, honorable. The list could go on. He was the best husband, daddy, and papaw in the world. He has left a legacy of love for God and family. He has run his race. He has kept the faith. He has entered into the joy of the Lord with the words, “Well done, thy good and faithful servant.”

The family of Edward Hutchins created this Life Tributes page to make it easy to share your memories.

Send flowers to the Hutchins family.