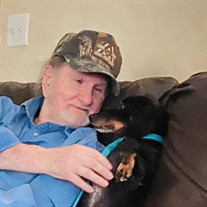 Edward “Eddie” Simeon Cox, Jr. Eddie Simeon Cox, Jr., 79, of Orange, passed away on June 23, 2021, in Beaumont. A graveside service will be held 11:00 a.m., Thursday, July 1, at Oakdale Cemetery, at 1194 West Santa Fe Road, Oakdale, Louisiana. Born in Oakdale, Louisiana, on April 10, 1942, he was the son of Edward S. Cox, Sr. and Anne (Butchee) Cox. Eddie was a pharmacist for many years and enjoyed hunting and fishing in his spare time. He delivered medicine locally and had a compassionate nature to help people. Eddie was a very independent man and loved his dogs especially Marly “the weeny”. He adored his children and grandchildren more than anything and will be dearly missed by those who knew and loved him. He was preceded in death by his parents, Edward and Anne Cox; sisters, Anne Edine Erwin and Doris Sanders; brother in laws, Lynwood Sanders and Mason Erwin. He is survived by his daughters, Jennifer Cox Horak of Albuquerque, New Mexico, Rebecca Cox of Orange, and Ashley Rion and husband Joe of Buna; grandchildren, Hayden Horak, Charlie Anne Horak, Weslyn Smalley, Dylan Rion, and Tyler Rion; nieces and nephews, Amy Erwin, Jo Erwin, Anne Spencer and husband Everett, Alan Sanders and wife Myra, Jim Sanders, and Steve Sanders and wife Donna; as well as numerous other loving family and friends. In lieu of flowers, memorial contributions can be made to the Humane Society of Southeast Texas, Be Intentional Nonprofit, or All Paws Veterinarian Clinic in his honor.

The family of Edward "Eddie" Simieon Cox, Jr. created this Life Tributes page to make it easy to share your memories.

Send flowers to the Cox, family.