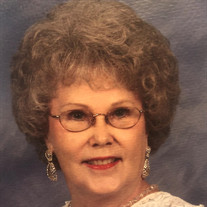 Edna Pauline “Polly” Sisco Olson of Orange, TX died on November 24, 2021, after a long battle with Alzheimer’s. She was 89 years old. She was born July 10, 1932, in Peggs, OK to John Lee Sisco and Esther Rice Sisco. Polly spent her childhood in Ponca City, OK until she moved with her family to Sulphur, LA as a teenager. She graduated from Sulphur High School. Polly met Robert “Bob” Olson, Sr. and they were married on August 20, 1954. They made their home in Sulphur. She worked at Olin Mathieson Chemical and Maplewood Baptist Church as a secretary for several years and was active in community theatre. In 1982, they moved to Eunice, LA and then to Orange, TX in 1992 when her husband retired. She was a member of First Baptist Church Orange, and in her later years, she was a member of Trinity Baptist Church of Orange. Polly also enjoyed serving in the Lions Club. She and Addie Wallace enjoyed many evenings serving popcorn at the Orange Lions Club Carnival and enjoyed shows at the Lutcher Theatre. She enjoyed singing, playing the piano, making stained glass works and metalcraft jewelry. She is predeceased by her parents, her husband Robert Olson, Sr., her sister Janice Jones and brother George Sisco. She is survived by her children Bob (Pat) Olson of Sulphur, LA; David Olson of Lake Charles, LA and Michael (Karan) Olson of Orange, TX; her grandchildren Kara Olson and Michelle Olson both of Austin, TX; her brother Jerry (Jimmye) Sisco of Sulphur, LA; her sister-in-law, Paula Sisco of Longville, LA; and a host of nieces and nephews. The family would like to thank Pelican Bay Memory Care of Beaumont, TX for the wonderful care of their mother. There will be a small graveside service for family members only. The family asks that, in lieu of flowers, donations be sent to the Alzheimer’s Association in memory of Pauline Olson. Arrangements are under the direction of Claybar Funeral Home.

The family of Edna Pauline Olson created this Life Tributes page to make it easy to share your memories.

Send flowers to the Olson family.