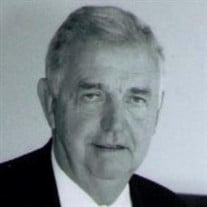 Duane F. Henley Sr. passed away on April 22, 2021 at the age of 85 in Beaumont, Texas. He was born in Nebraska City, Nebraska on December 6th, 1935 to Ed Henley and Sylvia Tyrell. He moved to Orange, Texas in his senior year of high school and there he met his wife of 53 years, Frances Ann Warren Henley. He spent many years building homes in Orange as the owner of Henley Construction Company, Inc. and supported Frances while she earned a master’s in Microbiology from McNeese University. After retirement, he spent 4 years with his grandchildren in Pacifica, California. He enjoyed traveling, exercising, reading, and most of all spending time with family including the annual family trip to Destin, Florida where he and Frances had honeymooned in 1957. He was quick-witted, kind-hearted, and a giving man. Duane and Frances were particularly focused on their children’s education, including a belief in higher education. Three of the four children graduated from the University of Texas and one from the University of Houston. Duane was always looking to make life just a little bit better for those he knew, and even those he had never met. His compassionate heart will be sorely missed! He was preceded in death by his wife, Frances. He is survived by his sister, Judy Peiserich and her husband Dick, and his brother, Keith Henley. He is also survived by his four children, nine grandchildren and three great grandchildren: Son, Duane Jr. of Dallas, TX and his family, Jennifer Nichols(partner) and his children Duane Henley III, Georgia, and Lily, Son, Paul of Orange, Tx. his family, Glenetta (wife), children Alana Newsome and her husband Shaun, Taylor Vesey and her husband AJ , Cory Collier and his wife Brittany and Shelby, Son, Jeff Sr. of Austin, Tx. his family, Marla (wife), children Erin Portas and her husband Will, and Jeffrey Jr., and Daughter, Laura Quigley of Pacifica, Ca. her family, Peter Quigley (husband), children Pierce and Abigail Quigley. Great grandchildren are Liam Portas, Charlotte Collier and Olivia Collier. Visitation will begin at 12:00 p.m. on Tuesday, April 27th at Claybar Funeral Home in Orange. Following the visitation will be a Mass of Christian Burial at 1:00 p.m. at St. Mary Catholic Church in Orange, with Reverend Joseph P. Daleo, Pastor, serving as Officiant. Burial will follow at 6:00 p.m. Tuesday, at Hallsville Cemetery in Hallsville, Texas.

Duane F. Henley Sr. passed away on April 22, 2021 at the age of 85 in Beaumont, Texas. He was born in Nebraska City, Nebraska on December 6th, 1935 to Ed Henley and Sylvia Tyrell. He moved to Orange, Texas in his senior year of high school and... View Obituary & Service Information

The family of Duane F. Henley Sr. created this Life Tributes page to make it easy to share your memories.

Send flowers to the Henley family.