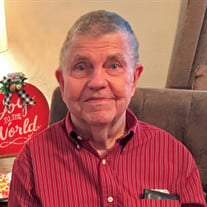 Don Earl Pickard, 82, of Bridge City, ran into the open arms of his Lord and Savior, Jesus, on December 8, 2021 A celebration of life will be held from 7:00 p.m. to 9:00 p.m., Tuesday, December 14, 2021, at Common Ground Community Church in Bridge City. Officiating will be Pastor Bud Davis. Born in Frankston, Texas, on May 30, 1939, he was the son of John Ide Pickard and Ruth (Williams) Pickard. Don was a member of the National Guard for 8 years. He retired after 37 years of hard work and dedication from DuPont. Don was involved in several volunteer organizations including RSVP and the Orange Co. Sheriff’s Citizen’s Acadamy, where he went through vigorous training. He was very active throughout his lifetime and enjoyed every moment life had to offer. He was thoroughly loved and will be missed by all who came to know him. He was preceded in death by his parents, John and Ruth Pickard; brother, John Pickard; and sister-in-law, Ruby Pickard. He is survived by his loving wife of 63 years, Davette Pickard of Bridge City; son, Donnie Pickard and wife Christina of Bridge City; grandchildren, Hunter Pickard and wife Nicole, Lauren Royal and husband Justin, and Kiki Pickard; great-grandchildren, Logan and Aubrey Pickard and Maverick and Levi Royal; and sister, Paula Pickard of Kingwood; along with niece, Gloria Moore of Orange; and great-nephew, Chester Moore, Jr. of Orange. In lieu of flowers, memorial contributions may be made to the Orange County Ministerial Alliance at 200 W. Roundbunch Rd, Bridge City, Texas or Orange County Blue Santa via Deputy Richard Guzman at 409-238-9209.

The family of Don Earl Pickard created this Life Tributes page to make it easy to share your memories.

Send flowers to the Pickard family.