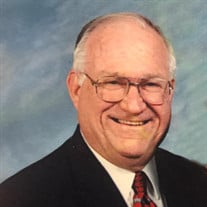 David Lee Trumble, 82, of West Orange, passed away on March 9, 2021, in Port Arthur. Funeral services will be 11:00 a.m., Monday, March 15, 2021, at Claybar Funeral Home in Orange. Officiating will be Pastor David Millner. Burial will follow at Hillcrest Memorial Gardens in Orange. Visitation will be from 5:00 p.m. to 9:00 p.m., Sunday, March 14, 2021, at Claybar Funeral Home in Orange. Born in Naples, Texas, on September 30, 1938, he was the son of Isham Lee Trumble and Erma Dee (Mauldin) Trumble. David served his Lord faithfully at Calvary Baptist Church for a number of years. He graduated from Little Cypress Mauriceville High School in 1957. While in high school he began driving the school bus in the eleventh and twelfth grade. After high school he began working at Siegler’s gas station where he was a full-service attendant. He began his career at Dal Sasso Home Building and went on to manage the lumber yard at Coastal Lumber. After his time with the lumber yard, he began working at Levingston Shipyard; later, going on to work for the U.S. Postal Service delivering mail for over 31 years. David was known to frequently stop on his mail route and help out those in need. During his time with the Postal Service, he began working for Claybar Funeral Home, where he remained for over 46 years. Throughout the years of being a Claybar staff member, David grew into a loving member of the community. He formed many friendships that would go on to last a lifetime. David never met a stranger and was always willing to lend a hand in whatever way he could. He loved his faith, as it carried him through any trial and tribulation life brought him. David taught the Men’s Sunday School class, Sanctuary class and was a Sunday School Superintendent for a number of years. He was a volunteer firefighter in West Orange and took great pride in his service to the community. David could fix anything and came to his family’s rescue with his handywork on numerous occasions. He was a jokester through and through and was often found playing practical jokes and laughing at the stunts he’d pull. David was an avid domino player. He was a talented cook and enjoyed tending to his garden. David adored his wife, children, grandchildren, and great-grandchildren, and made them the center of his whole world. David left a lasting impact on everyone he met through his life’s journey and will be deeply missed for years to come. He was preceded in death by parents, Isham Lee and Erma Dee Trumble; grandparents, Isham Stroud Trumble and Maggie Myers Trumble, and Forrest H. Mauldin and Nancy Price Mauldin; grandson, Derrick Kaufman; nephews, Bryce Allen Trumble, Jr. and Mark Farman; and recently, his two domino buddies, Rayburn Matthews and Robert Armstrong. He is survived by his loving wife, Wanda M. Sharp Trumble; children, Tammie Lee Trumble Vallery and Milton of West Orange, Chet Allen Trumble and wife Terry of Lexington, Kentucky, Forrest E. Trumble and wife Susan of Tampa, Florida, Peggy LaNell Trumble Hudelson and husband Todd of Oakdale, California, and Patrick Douglas Trumble and wife Amy of Orange; grandchildren, John Vallery and wife Kari, Wendee Vallery Smith and husband Stephen, Britney Eppler, Matthew Trumble and wife Sarah, Lacy Trumble Sonnier and husband Josh, Christian Trumble and girlfriend Alexis, Brett Trumble, Kylie Hudelson, Delany Hudelson, Cheyenne Durio, Ian David Lee Trumble, Ty Hudelson, Jacquelyn Meder, Sgt. Gage Rader, and Second Class Hunter Rader; great-grandchildren, Taylor Vallery, Dalton Vallery and girlfriend Heaven, Trey Tripp, Serenitee Smith, Gunter Sonnier, Phalen Sonnier and Sutton Meder; siblings, Bryce Allen Trumble and Janice of Linden, Texas, Melba LaVon Trumble Torongeau and husband Bob of Anderson, Indiana, Rosie Nell Trumble Miller of Anderson, Indiana; along with numerous nieces and nephews; and the rest of his beloved Claybar family. Serving as pallbearers will be John Vallery, Matthew Trumble, P. Christian Trumble, Dalton Vallery, Ty Douglas Hudelson, and Ian David Lee Trumble. Honorary pallbearers are Trey Tripp, Bret Trumble, Milton Vallery, Troy Lesher, Randy Drounette, Mike Sughart, Tom Hanten, Billy Frederick, Michael Miller, Tony Dupre, and Wynne Sharp. In lieu of flowers, memorial contributions can be made to Calvary Baptist Church at 2402 Western Ave. Orange, Texas 77630.

The family of David Lee Trumble created this Life Tributes page to make it easy to share your memories.

Send flowers to the Trumble family.