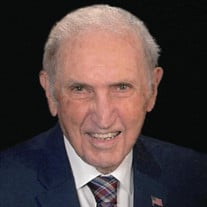 David Gerald Taylor, 95, formerly of Beaumont, Texas, passed away from this earth on March 3, 2022, in Lafayette, Louisiana. David was born on September 22, 1926, in Aberdeen, Mississippi. After graduating from Aberdeen High School in 1943, he joined the Army Air Corp, where he served until 1945. After returning from the Army, he entered Mississippi College where he studied business. In 1946, he married Etoie Hodges, and they moved to Waco where they both attended Baylor University. It was there that he earned his Bachelors and Masters of Business Administration. In 1949, he began teaching at Arkansas State in Jonesboro, Arkansas. While in Jonesboro, his three children, David Jr., Diane, and Denise, were born. In 1955, he and his family moved to Beaumont, where he began teaching marketing at Lamar State College of Technology, which later became Lamar University. He retired in 1988 with so many wonderful memories and stories of his many years teaching in the Business Department at Lamar. When he and his family moved to Beaumont, they joined First Baptist Church. He served many years on numerous committees and as a Sunday School teacher and deacon. He also began volunteering at Baptist Hospital, where he was well known and loved. He continued to volunteer until he was almost 90 years old. In 2013, his beloved wife of 60 years succumbed to complication following heart surgery. God did not plan for him to be alone, so He sent Kathryn Steelman to love and care for him and they married in 2014. After Hurricane Harvey destroyed their home in Beaumont, he and Kathryn moved to Lafayette, Louisiana, where he was residing at his death. Preceding him in death are his first wife, Etoie Hodges Taylor; his daughters, Diane Watson and Denise Young; and his sister, Claire Barlow. Surviving him are his wife, Kathryn Taylor of Lafayette; his son, David Taylor, Jr. and wife Jo Nell of Port Neches; his grandchildren, Aaron Watson of Utah, Kimberly Williamson and husband Shon of Fannett, Kristi Resendez and husband Brandon of Humble, and Rachel Watson and Phillip Watson of Comanche. He is also survived by four great-grandchildren, Austin Williams, Griffin Resendez, Canon Williamson, and Emry Resendez, and would have become a great-great-grandfather later this month. Also surviving him are his stepchildren, Theresa Sudduth and husband Scott, Kyle Steelman and wife Sara; and step-grandchildren, Kenneth Ryan, Jacob Steelman, Emily Daigle, and Hunter Sudduth. A funeral service will be held at 11:00 a.m., Tuesday, March 8, 2022, at Claybar Kelley-Watkins Funeral Home in Beaumont. Officiating will be Chaplain David Cross. Burial will follow at Forest Lawn Memorial Park in Beaumont. Visitation will be held prior to the service, beginning at 10:00 a.m., Claybar Kelley-Watkins Funeral Home. Serving as pallbearers will be Brandon Resendez, Shon Williamson, Aaron Watson, Gary Bell, Don Jeffcoat, and Lindy Dennis. Honorary pallbearers will be H.F. Weatherly and Ward McCurtain.

David Gerald Taylor, 95, formerly of Beaumont, Texas, passed away from this earth on March 3, 2022, in Lafayette, Louisiana. David was born on September 22, 1926, in Aberdeen, Mississippi. After graduating from Aberdeen High School in 1943,... View Obituary & Service Information

The family of David Gerald Taylor Sr. created this Life Tributes page to make it easy to share your memories.

Send flowers to the Taylor family.