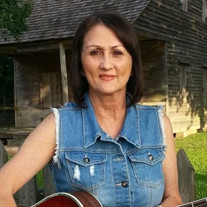 Darlene Faye Jennusa, 67, of Port Neches, passed away on September 3, 2021, in Port Neches, Texas. Funeral services will be 10:00 a.m., Saturday, September 11, 2021, at Claybar Funeral Home in Bridge City. Burial will follow at Hillcrest Memorial Gardens in Orange. Visitation will be from 5:00 p.m. to 8:00 p.m., Friday, at Claybar Funeral Home in Bridge City. Born in Texas City, Texas, on October 17, 1953, she was the daughter of Weston Harrington and Agnes (Cormier). Darlene was an excellent wife, mom, and grandmother that was completely dedicated to her family. Her grandkids were the loves of her life, and she couldn’t help but to spoil and spend as much time as she could with them. Darlene not only liked to spend time with her grandkkids, but her family gatherings were very special to her along with spending time at the beach with them. Her faith was also very important to her, she would always say her singing was her ministry. Her voice was beautiful. Spreading the word of the Lord through her gospel music was her hearts desire. Darlene was a beautiful woman inside and out, and she will be dearly missed by all who knew and loved her. Darlene’s love and devotion was felt through her love of gospel music and song writing. She played nursing homes, churches, as well as being asked to play in Southern Gospel Jamboree, Texla Jamboree, Texla Gospel Association at Jamboree Fund Raisers, Pavilion in the Pines, numerous Old Time Southern Gospel Singings. She was also invited to the King Country Apape Fest where she was voted and nominated twice for “Female Horizon Artist” and asked to sing in the International Country Gospel Music Association Awards Show in Missouri – where singers around the country were honored in excellence and ministry with awards. Along with many honors and awards Darlene was able to perform with several groups including the Caney Creek Country Gospel Band, Church on the Rock Country Band, and the last group she was able to perform with; Back to the Cross Band. She was preceded in death by her parents, Weston and Agnes Harrington; baby, Landon Dugas; and sister Penny Richard. She is survived by her loving husband of 27 years, Donald Jennusa; children, Jason Kay of Vidor, TX, and Angela Blouin of Woodlands, TX; step-children, Clayton and Sidney Jennusa; grandchildren, Carlie Arabella, Ashley Barton, Brooke Blouin, Harper Blouin, Justice Kay, Lila Jennusa, and Kasen Jennusa; great-grandchild, Lennox; sister, Judy Granger; nieces and nephews, Lori, Kristlyn, Josh, Heather, Candice, Lacy, Shelby, and Ashley; and many great nieces and nephews. Serving as pallbearers will be Josh Granger, Clay Jennusa, Justice Kay, Blake Laughlin, Paul Brady, Joseph Robertson, and Kevin Blouin. Junior pallbearer is Harper Blouin.

The family of Darlene Faye Jennusa created this Life Tributes page to make it easy to share your memories.

Darlene Faye Jennusa, 67, of Port Neches, passed away on September...

Send flowers to the Jennusa family.