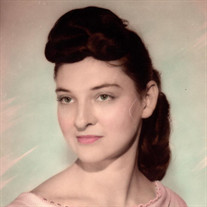 Daisy “Vianna” Miller, 86, of Orange, passed away on January 2, 2022, at her home in Orange. Funeral services will be 10:00 a.m., Saturday, January 8, 2022, at Claybar Funeral Home in Bridge City. Officiating will be Reverend Murray Ray. Burial will follow at Bob Herrin Cemetery in Bon Wier. Visitation will be at 9:00 a.m., Saturday, January 8, 2022, at Claybar Funeral Home in Bridge City. Born in Dodge, Texas, on December 7, 1935, she was the daughter of Jesse W. Couch and Daisy Mable (Knight) Bordelon. Vianna was a member of the Eastern Star and faithfully served her Lord at Bridge City United Pentecostal Church. She was a loving mother and grandmother, who took great care of each and every family member. Her grandchildren were her whole world and they adored her. She enjoyed china painting, and spending time at the lake, camping with her husband and enjoying the scenery. Vianna impacted many lives during her time on Earth and will be deeply missed by all who loved her. She was preceded in death by her parents, Jesse William Couch and Daisy Mable Knight Bordelon; and husband, L.G. Miller. She is survived by her children, Veronica Ann Miller of Houston, Arnae Vianna Strong and husband Rodney G. Strong of Draper, Utah and Louis Clifton Miller of Orangefield; grandchildren, Megan Nicole Choate of Draper, Utah and Aaron Nathaniel Miller of Orangefield. Serving as pallbearers will be Rodney Strong, Aaron Miller, Louis Miller, Joe Alexander and Mark Choate. The family would like to extend their gratitude to Bridgett Hlavinka and her caregivers, Jackie Salinas and Linda Gomez for their love and compassion shown to Vianna in her final days. In lieu of flowers, memorial contributions can be made to Bridge City United Pentecostal Church.

The family of Daisy "Vianna" Miller created this Life Tributes page to make it easy to share your memories.

Send flowers to the Miller family.