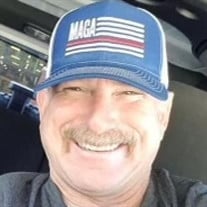 Craig William Boudreaux, 59, of Bridge City, passed away on August 28, 2021, in Port Arthur. Funeral services will be 2:00 p.m., Saturday, September 4, 2021, at BridgePoint Church in Bridge City. Officiating will be Reverend Richard Landry. Burial will follow at Hillcrest Memorial Gardens in Orange. Visitation will be from 12:00 p.m. from 2:00 p.m., Saturday, September 4, 2021, at BridgePoint Church in Bridge City. Born in New Iberia, Louisiana, on October 5, 1961, he was the son of Robert Boudreaux and Frances (Bowman) Boudreaux. Craig lived a full life with the heart of a hero. He served bravely in the United States Marines and went on to work the Orange County Sheriff’s Department as Corporal and retired after 31 years of service to his community. He always looked forward to “Beer Mondays” with his friends, sharing stories and cracking jokes for hours on end. Craig took great joy in cooking with his “gourmet” recipes, and grilling. He could throw just about anything together and make it taste good. He was incredibly active and enjoyed going to the gym and staying loyal to his workout regimen. Craig loved riding his Harley and looked forward to attending Bandera every year with his brother. He would give the shirt off his back to anyone who needed at any given time and always made those around him feel special and loved. He was very close to his mother and was the best son she could have ever asked for. He often completed to do lists to help his mother out, doing everything he could to make her happy. Craig was an incredible father to his son, whom he was endlessly proud of. Every year he made sure to plan and carry out a father-son road trip, that will remain in Colton’s heart forever. Craig was a firm believer in road maps and not using a GPS, no matter how convenient it might’ve been at times. He believed Neosporin and a bandaid would cure anything, especially his toecap. LLC. (Live Like Craig) His life long dream was to live in Costa Rica on the beach and drink cold beer. We can only hope there is clear water, white sand beaches, and an ice cold beer waiting for him in heaven. He was not a regular church goer, but lived his life as a Christian. He was preceded in death by his father, Robert “Pop” Boudreaux; and grandparents, Otis & Inez Boudreaux and Helen & George Savoy. He is survived by his mother, Frances Boudreaux; son, Colton Boudreaux; siblings, Angie Boudreaux Barrows of Bridge City, Stuart Boudreaux and fiancé Hope Simon of Bridge City; nieces and nephews, Kyndall Boudreaux, Kayla Rippeon, Brock Barrows and fiancé Karissa and Bree Barrows Sweat and husband Alex; mother of his child, Crystal Yocham; and his New Orleans Lady, Wendy Reed. Serving as pallbearers will be Colton Boudreaux, Stuart Boudreaux, Gary LaChance, Paul Neely, Chris Hall, Mark Jones, Brad Crone and Marty Klucik. Honorary pallbearers are his Brothers in Blue, Beer Monday Crew, Carroll LeBlanc, Mickey Brones and Ronnie Richard. In lieu of flowers, memorial contributions can be made to St. Jude’s at www.stjude.org.

The family of Craig William Boudreaux created this Life Tributes page to make it easy to share your memories.

Craig William Boudreaux, 59, of Bridge City, passed away on August...

Send flowers to the Boudreaux family.