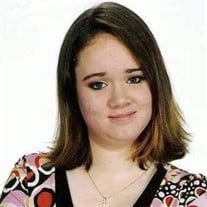 Courtney Allysse Hodge, 34, of Orange, passed away on March 17, 2021, in Port Arthur. Funeral services will be 11:00 a.m., Monday, March 22, 2021, at Circle Drive Baptist Church in Bridge City. Officiating will be Reverend Jack Comer. Cremation will follow funeral services. Visitation will begin at 10:00 a.m., prior to the funeral service at Circle Drive Baptist Church in Bridge City. Born in Liberal, Kansas, on March 20, 1986, she was the daughter of Billy Garrett and Melissa (Chandler) Garrett. To sum up Courtney would be to mention that she was glue to her family. She was a bright light that brought joy to everyone’s world and lit up every room she walked into. The center of Courtney’s whole universe was her family, keeping up with every anniversary, birthday, or special occasion, with the incredible knack to make everyone feel important. She adored her nieces and nephews and they referred to her as “Aunt CoCo”. She often organized all of the family’s events and kept up with the family pictures. If Courtney was there, you could be guaranteed that she was the first to arrive and last to leave, making a point to help out with whatever she could. She was a faithful member of Circle Baptist Church in Bridge City where she served her Lord faithfully. Courtney adored her fur-baby, her cat Patches. She left an impact on everyone she met, and her light will continue to shine bright for years to come. She is survived by her loving husband; Cory Hodge; father, Billy Garrett and wife Martha of Bridge City; mother, Melissa Chandler-Dresser of Colorado Springs; grandparents, Ron and Gloria Garrett of Brookland and Patsy Kibbe Gifford of Bridge City; siblings, Shawn Garrett and wife Kaylia of Katy, Tory Garrett of Carrollton, Brady Garrett and wife Ashley of West Orange, and Fara Grounds and husband Ryan of Plano; her mother-in-law and father-in-law, Gary and Patti Hodge of West Orange; brother-in-law and sisters-in-law, Cody Hodge and wife Kristin of Vidor, and Cayla Hodge of Orange; and nieces and nephews, Zennetta Garrett, Eavan Garrett, Jameson Garrett, Cade Hodge, and Carson Hodge; along with numerous other loving family and many friends who loved her dearly. Serving as pallbearers will be Ryan Grounds, Tory Garrett, Shawn Garrett, Brady Garrett, Cody Hodge, and Gary Hodge.

The family of Courtney Allysse Hodge created this Life Tributes page to make it easy to share your memories.

Send flowers to the Hodge family.