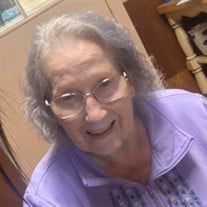 Amanda Cornelia Holder was born October 20, 1924 in Desoto Parish, Louisiana, and left this world on May 15, 2021. She lived in Logansport, Louisiana and went to school there. In her early years, she helped her family, who were share croppers. She picked, chopped, and hoed cotton. She told stories of her family starting her with a pillow case as a cotton sack. As she grew older, she graduated to sacks that would get larger and larger and would drag them down the rows until full. Other chores were milking cows, churning butter as well as hauling water from a well to do cooking, laundry, and bathing. Cornelia had a full life. After graduating from school, she was transported to a welding school in Shreveport, Louisiana. After completing the school, she was sent to a shipyard in Houston, Texas where she was soon a 3rd class welder. She progressed to a 2nd class welder and later promoted to 1st class. Welding did not pay much at the time, but this was during WWII and while many of the men were off fighting for our country, the women had to step in where they were needed. After the war ended, she was employed by Folgers Coffee Company where she packed coffee. Her next employment was as a switch board operator for the phone company in Houston. She met Carl Holder, also a welder, at the shipyard in Houston during the war. They married around 1946. Afterward, she remained a faithful wife, mother and homemaker. Her hobbies included sewing and gardening. She loved to cook and taught herself to crochet from a text book. She was a faithful Christian and a member of a large congregation, the Mauriceville Church of Christ and enjoyed crocheting baby blankets for all the new little ones. She taught many children in Sunday School and always helped prepare meals for those in need. She was preceded in death by her husband of over 50 years, Francis Carl Holder; parents, Frank Monroe Tindall and Mary Cornelia (Collins) Tindall; brothers, Harvey Edward, Holland Eugene, James Arthur, Frank Monroe, Jr. and J.D. Tindall; sisters, Martha Avalonia Diamond and Ola Dean Tindall. Those left to mourn her passing are her daughter, Sharon Holder Bailey (Charlie); sons, Charles Holder (Linda), Clyde Holder, Donald Holder (Wilma); grandchildren, Regina (Gill) Shambaugh, Johnny Gill (Jami), Charlie Holder (Tara), Meghan Holder Toney , John D. Barras (Gina), Dustin Holder, Emilee Holder Detrick, Blake Holder, Caleb Holder, Carolyn Holder, Donald Wayne Holder (Stephanie) and Sherry Holder; eleven great grandchildren and four great great grandchildren. One of Cornelia’s main goals in life was to encourage her children and grandchildren to love the Lord and be faithful in their service to Him. Visitation will be at Claybar Funeral Home in Orange beginning at 1:00 p.m. Saturday, May 22, 2021 followed by the funeral service at 2:00 p.m. Officiating will be Mr. Chris Eppler and congregational singing will be led by Mr. David DeYoung. Serving as pallbearers will be Charlie Holder, Johnny Gill, Hayden Holder, Donald Wayne Holder, Dustin Holder and Caleb Holder. Honorary pallbearers will be Meghan Toney, Ashton Holder, Emilee Detrick and Charlie Bailey.

Amanda Cornelia Holder was born October 20, 1924 in Desoto Parish, Louisiana, and left this world on May 15, 2021. She lived in Logansport, Louisiana and went to school there. In her early years, she helped her family, who were share croppers.... View Obituary & Service Information

The family of Cornelia Tindall Holder created this Life Tributes page to make it easy to share your memories.

Send flowers to the Holder family.