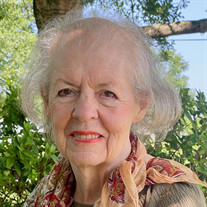 Cora Sue Roberts Burch, 80, passed away on March 7, 2022, at her home in Orange. Born on April 14, 1941, in Hemphill, Texas, Cora Sue was raised in Orange in a loving home with her parents and four sisters. She was the oldest of the five “Roberts girls.” Her sisters were some of her greatest joys, and she was so proud of them. Cora Sue was the quiet one, while the others were social and outgoing. They cheered and played sports, and Cora Sue gladly cheered for them from the sidelines. Because she was timid and reserved, she was surprised to learn she had been chosen as Homecoming Queen by her senior class. She was admired and revered by her peers. Her senior yearbook stated, “If smiles were money, she would be a millionaire.” Cora Sue met the love of her life, Mark E. “Chuck” Burch, while they were both working at DuPont. They were married on November 14, 1964, and built a home in the Cove where they raised their three children. Truly a Proverbs 31 woman, Cora Sue was respectful of her husband, protective of her family, resourceful with her blessings and reverent to her Lord. After having their first child, she worked as a homemaker and was wholly devoted to her husband and family. She enjoyed painting, sewing, cooking, and gardening at home as well as with the Orange County Master Gardeners. She served in her church, her children’s schools and the local Aggie Moms Club. Quiet by nature, she chose to serve in the background, never drawing attention to herself, preferring instead to watch others shine. “Gran Gran” loved her grandchildren dearly and poured her heart into caring for them when they were young. Cora Sue was fully involved, taking them to school and their activities and helping with their homework. She took them to church every Sunday and to the DERA pool in the summer. She enriched their lives in so many ways, even teaching them to cook and crochet. Cora Sue was preceded in death by her beloved husband of 57 years, Mark E. “Chuck” Burch, and parents, LC Roberts and Ruth Roberts. She is survived by her children, Mark Burch, Jr and wife Leslie, of Orange; Kerri Burch Norwood and husband Allen Montgomery, of Houston; and Katherine Burch Partida and husband Neftali Partida, of Pearland; grandchildren, Korri Ayers, Christian Norwood, Lacey Burch, Marleigh McNeal, Alyssa Kelley, Isabella Partida and Nicholas Partida; great-grandchildren, Ginger Ayers and Cade Tarver; and sisters, Beverly Hanes, Barbara “Bobbie” Welch, Peggy Carroll and Brenda Coker. Services will be held at Cove Baptist Church in Orange on Friday, March 11, 2022, with visitation at 2:00pm and a funeral service immediately following at 3:00 pm. Burial will follow at Orange Forest Lawn Cemetery in West Orange. Rev. Jeff Bell will officiate the services. Serving as pallbearers will be Neftali Partida, Nicholas Partida, Allen Montgomery, Christian Norwood, John Hanes and Will Burch. “Her children rise up and call her blessed.” Proverbs 31:28

Cora Sue Roberts Burch, 80, passed away on March 7, 2022, at her home in Orange. Born on April 14, 1941, in Hemphill, Texas, Cora Sue was raised in Orange in a loving home with her parents and four sisters. She was the oldest of the five &#8220;Roberts... View Obituary & Service Information

The family of Cora Sue Roberts Burch created this Life Tributes page to make it easy to share your memories.

Send flowers to the Burch family.