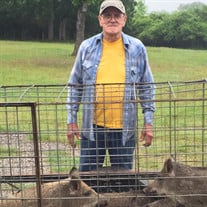 Clarence Leon Taylor, 87, of Kirbyville, passed away on April 14, 2021, in Orange. Funeral services will be 2:00 p.m., Sunday, April 18, 2021, at Claybar Funeral Home in Bridge City. Officiating will be Rev. Keith Royal. Burial will follow at Hillcrest Memorial Gardens in Orange. Visitation will begin at 1:00 p.m., Sunday, at Claybar Funeral Home in Bridge City. Leon was born in Orange, Texas to Owen and Ollie Taylor where he was the youngest of 13 kids. Leon learned at a young age the meaning of hard work when he left school in the 6th grade to start helping with the family farm. He learned to trap and hunt animals for the meat, furs, and hides wherever extra money would be earned. He later joined the Army and was Honorably Discharged November 30th, 1961. Leon worked in the shipyards and construction as a welder. He also taught those that loved him and knew him the value of working hard and to never give up when things were not going well, but most especially, he taught the values of life. Leon was the true meaning of a good man. He will be truly missed. Leon was also of the mindset that a man’s word and a handshake would always be better than a written contract. Leon truly enjoyed hunting, fishing and trapping hogs with his longtime neighbor Charles Bellows. They were the best of friends. He was preceded in death by his parents, Owen and Ollie Taylor; his longtime companion, Patty Foster; and his three children, Boyd Taylor, Angie Taylor Strong and Steven Taylor. He is survived by nephew, J.W. Dalton and wife Becky of Mauriceville, Greg Collins and wife Karren of Beaumont and Charles Bellows of Kirbyville; and niece, Judy Taylor of California; and many nieces and nephews. Serving as pallbearers will be J.W. Dalton, Greg Collins, Logan Williford, Jase Wright, Justin Bufford, and Gregory Collins.

The family of Clarence Leon Taylor created this Life Tributes page to make it easy to share your memories.

Clarence Leon Taylor, 87, of Kirbyville, passed away on April...

Send flowers to the Taylor family.