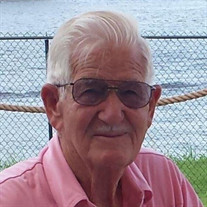 Cecil Roland Sylvester, 94, of Tomball, passed away on March 17, 2021, in Tomball. Funeral services will be 2:00 p.m., Tuesday, March 23, 2021, at Claybar Funeral Home in Orange. Burial will follow at Hillcrest Memorial Gardens in Orange. Visitation will be prior to the funeral service, beginning at 1:00 p.m., at Claybar Funeral Home in Orange. Born in Electra, Texas, on August 20, 1926, he was the son of Barney A. Sylvester and Dolly Lee (Johnson) Sylvester. Cecil served his country bravely during World War II with the United States Navy. He was boarded on USS Niagara APA 87 when he received the news the war had ended. For many years Cecil worked as an electrician at various refineries and even lived in Saudi Arabia for 7 years while employed with Aramco. He proved to be a hard worker even in his later years, working as a Senior Driver for Southeast Texas Transit in his 80’s. He often joked his job was drive around the “old people”. Cecil enjoyed golfing and spending time with his beloved grandchildren and great-grandchildren who referred to him as “Big Cec”. He was very personable and could make friends with anyone he met. Cecil had a warm and endearing personality that attracted all those around him. He will be deeply missed by all those who came to love him in his well lived life. He was preceded in death by his parents, Barney and Dolly Sylvester; loving wife of over 50 years, Billie Jean Sylvester; and sons, Mark Whitfield Sylvester and Barney Lee Sylvester. He is survived by his son, Jeffry Scott Sylvester and wife Sharon of Tomball; grandchildren, Heather Roper and husband David, Patrick Maguire, Charlie Maguire, and Kate Peterson and husband Chris; and great-grandchildren, Landon Roper, Heidi Peterson, and Juliette Peterson.

The family of Cecil Roland Sylvester created this Life Tributes page to make it easy to share your memories.

Cecil Roland Sylvester, 94, of Tomball, passed away on March...

Send flowers to the Sylvester family.