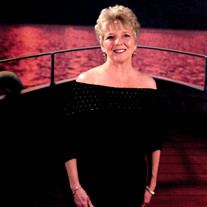 Carol Dean Johnson Simer, 75, of Orange, passed away on August 25, in Houston, Texas. Funeral services will be 2:00 p. m., Tuesday, August 31, at North Orange Baptist Church in Orange. Officiating will be Pastor Rusty Dollar and Pastor Chip Anthony. Visitation will be from 1:00 p. m. to 2:00 p. m., Tuesday, August 31, at North Orange Baptist Church in Orange. Born in Beaumont, on December 17, 1945, she was the daughter of Junior Johnson and Ledye Ethel (Scott) McCaleb. Carol was a woman with love to give, especially to her family. She loved to travel and spend every moment she could with her family, everything revolved around her grandchildren. She was graduate of Stark High School, where she made many friends in her graduating class. They remained very close and even got together on a regular basis to participate in community activities together. Carol was also a devoted member of the North Orange Baptist Church and had a deep love for the Lord. Carol was the type of woman that had never met a stranger and made friends wherever she went. She loved life and loved to dance, many said that she lit up a room and gave the best hugs. She will be deeply missed by all those that came to know her. She was preceded in death by her parents, Junior Johnson and Ledye Ethel McCaleb; husband Deacon Maurice Marlin Simer; and brother, Roy Gene Johnson. Carol is survived by her children, Skot Alexander, Rob Alexander and wife Raven, and Kimme Potter and husband Scott; stepchildren, Marlin Simer and wife Wuanita, and Cassie Simer; grandchildren, Skylar Alexander Wix and husband Addison, Kaylee Potter, Karson Potter, Talon Alexander, and Scarlett Alexander; siblings, Jimmy McCaleb, Freddy McCaleb, and Kathy Stark and husband Earl; former husband and father of her children, James Alexander; as well as many nieces and nephews. Serving as honorary pallbearers are Karson Potter, Talon Alexander, Scott Potter, Dustin Stark, Erik Stark, and Larry Stanley. Flowers should be delivered to North Orange Baptist Church on Tuesday. Services are held under the direction of Claybar Funeral Home in Orange.

The family of Carol Dean Johnson Simer created this Life Tributes page to make it easy to share your memories.

Carol Dean Johnson Simer, 75, of Orange, passed away on August...