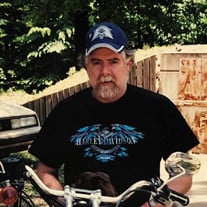 “Butch” Wayne Kiser, 61, of Bridge City, passed away on September 16, 2021, in Port Arthur. A Visitation will be held from 5:00 p.m. to 7:00 p.m., Tuesday, September 21, 2021 at Claybar Funeral Home in Orange. Military Honors will be held at 6:00 p.m., Tuesday, September 21, 2021, at Claybar Funeral Home in Orange. Cremation will be held under the direction of Claybar Funeral Home. Born in Orange, Texas, on October 26, 1959, he was the son of Mary Elizabeth (Golden). Butch was a very hard worker as a Tire Shop Tech for many years, he also worked for Equitable Bag in Orange, GE in Beaumont, and Remington making bullets. He could be a very hardheaded and stuborn man, but always had a soft spot for his beloved grandkids. He loved all of his grandchildren and was known as #1 “Pawpaw Butch” to them. Along with loving his grandchildren he loved his Harley Davidson Motorcyles. He was a great father and pawpaw and will be missed dearly by those who knew and loved him. He was preceded in death by his mother, Mary Elizabeth (Golden); grandparents, JC and Mary Avenel Golden; Uncle, Tommy Golden; Aunt, Beverly Weber; and fur baby, Gizmo He is survived by his daughters, Ashley Hooper of Bridge City and Stephanie Hooper of Bridge City; son, Chris Woodall of Orange; 12 grandchildren; siblings, Karen Kiser, Jim Kiser, Billy Kiser, and Stella Kiser

The family of Butch Wayne Kiser created this Life Tributes page to make it easy to share your memories.

“Butch” Wayne Kiser, 61, of Bridge City, passed away on September...

Send flowers to the Kiser family.