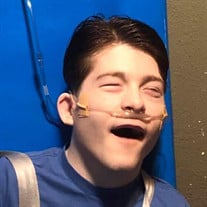 On the evening of September 9, 2021, Bryce Austin Breshears left the loving arms of his mother and burst through the gates of Heaven shouting, “Here I am!” A funeral service will be held at 11:00 a.m., Thursday, September 16, 2021, at Claybar Funeral Home in Orange. Officiating will be Rev. Barry Bradley. Visitation will be from 10:00 a.m. to 11:00 a.m., Thursday, at Claybar Funeral Home in Orange. Bryce is the son of Teresa and Kevin Breshears. Bryce was born November 15, 2003 in Houston, Texas, and immediately worked his way into the hearts of everyone. Bryce loved being held by his mother who loved nothing more than to hold him and sing silly songs to him that would make him laugh. Bryce loved music and especially loved the singing of his sister Marissa who would sing to him as she lovingly played for him. Bryce also loved playing with his special caretakers, Carly Purcell, Samantha Sanchez and Georgia Robertson, all of who he loved very much. Bryce loved hearing his brother Chase coming into the room calling out, “Hey Bubba, to which he would respond, “Bubba.” Bryce’s laughter would fill the house as he played, “Where’s Bryce?” with his Grandmother Flo Breshears. His Grandmother and Grandfather Herrin loved holding him on their visits to the house. Bryce loved to sit directly in front of the TV when shows like the Voice were on so he could listen to the music…He also loved changing the channel or turning the TV off and seemed to always do it while Dad was trying to watch the quarterback throwing the winning touchdown pass. Then Bryce would just giggle. Bryce was loved deeply by his brothers Dustin and Chase, sisters Marissa, Kelcie and Alyssa. His aunts and uncles and cousins. Bryce was proceeded in death by his grandparents, R.C. Herrin, Erlene Herrin, Cecil Breshears Sr., and Florence Breshears as well as his Uncle Jerry Breshears. In lieu of flowers please make donations in Bryce’s Honor to Texas Children’s Hospital in Houston, Texas.

The family of Bryce Austin Breshears created this Life Tributes page to make it easy to share your memories.

On the evening of September 9, 2021, Bryce Austin Breshears left...

Send flowers to the Breshears family.