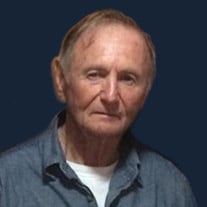 Bonnie Lee Childers, 90, of Lumberton, Texas passed away on March 29,2021. Born in Ripley, Mississippi, on November 10, 1930, he was the son of Bonnie Alford Childers and Nora Lee (Walls) Childers. Bonnie’s family moved from Ripley, Ms to Vivian, La and finally to Orange, Texas. Where his family owned and operated the “Childers” store on Green avenue. He was the oldest of 10. He graduated from Stark High School and went to Flory Telegraph School in Houston. When Bonnie graduated, he worked for the Texas-New Orleans railroad in Echo, TX as a radio operator. He joined the US Navy 3-13-1951 and served as a Radio Operator aboard the USNAAS, USSKula Gulf Aircraft Carrier, and USS WRIGHT. He was awarded the National Defense Service Medal, United Nations Service Medal, Korean Service Medal, and Good Conduct Medal. When discharged he went to work for the Orange, Tx Post Office. In 1957 he started his career in the “Lab” at Dupont, Beaumont. Bonnie coached Little League Football, enjoyed cooking, hunting, and offshore fishing. He became interested in Pecan grafting and Citrus budding in 1968. He was well respected and loved in Horticulture Industry. Bonnie grafted and budded trees from Belize to Belle Chase, La, to Greeley, Co, and all over Southeast Texas. He became know as “Mr. Citrus” or the “Satsuma King” to many. He cared greatly for his family and called them frequently. He was preceded in death by his wife, Jackie Childers of Lumberton, TX. Bonnie is survived by his Son William (Bill) Childers of Port Neches, his daughter and her husband Cynthia (Cyndi) and Patrick Grimes of Beaumont, His stepdaughters Debbie Greene of Pittsburg, Pa, and Sharon Greene of China Texas. Grandsons and wives Trey and Dana Hightower and Sean and Mary Grimes. 4 Great grandchildren. His loving dog FiFi. Memorial contributions may be made to VFW Veterans Foreign Wars https://heroes.vfw.org/page/23487/donate/1?locale=en-US

The family of Bonnie Lee Childers created this Life Tributes page to make it easy to share your memories.

Bonnie Lee Childers, 90, of Lumberton, Texas passed away on March...

Send flowers to the Childers family.