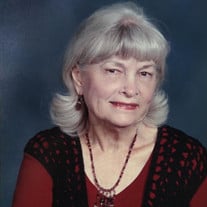 Billie Ann (Moore) Wood was born in Greensboro, NC on June 9, 1925. She had no brothers or sisters. She was raised in a big house in Greensboro with her Mom (Willie Mae Munday), grandfather, grandmother and several aunts and an uncle. Her father was Ignatius Valentine Schlosser. She graduated from Jamestown High School in Jamestown, NC. As a teenager, Billie modeled clothes for the Belk department store in Greensboro. She later worked for the Jefferson Pilot Insurance Company in Greensboro before becoming a Civil Servant in 1944. She worked in the War Department Army Ordinances Division in Greensboro which oversaw Wysong & Miles Co., the manufacturer of bomb fuses for the U.S. Army Air Corp. Following the end of the war, Billie transferred to the Overseas Replacement Depot (ORD) in Greensboro, where she processed paperwork for military replacements headed to Europe. Here she met and married 1st Lieutenant Robert Murray Wood in 1946, who also worked for the ORD. Later that year, the Greensboro ORD operation moved to Camp Kilmer in New Jersey. Lt. Wood and his new bride Billie relocated there. Robert (Bob) left military service in 1947, and he and Billie moved to Orange, TX where Robert worked for E.I. DuPont, Inc. until he retired in 1982. Early on, Billie worked for the War Assets Department at the U.S. Naval Base in Orange, processing paperwork to liquidate the base assets prior to its closing. Billie and Robert had two children Bobbie Ann (born 1949) and John Roger (born 1951). Raised as a Presbyterian, Billie joined the Methodist church after moving to Orange, and remained an active member of the First United Methodist Church for the rest of her life. Billie played golf, bowled, fished, square danced, gardened and played bridge in local bridge clubs. She collected dolls and glassware, sewed clothes, quilted, refinished/reupholstered furniture, painted/fired pottery and could make or repair just about anything around the house. She loved dogs, having dachshunds most of her adult life. She and Robert volunteered many years of service to the local Senior Citizen’s Gift and Thrift shop. Billie was a member of the Orange Woman’s Club and volunteered countless hours to Blue Birds, Cub Scouts, Little League and the Lions Club annual carnival. Billie is survived by daughter Bobbie Ann Ammons, son John Roger Wood, grandchildren Archie Wood Ammons, Samantha Kay Ammons, John Paul Farris Ammons and great granddaughters Willow Mirren and Amelia Mae Eastwood, and great grandsons Torin and Kieran Ammons. Funeral services will be held on Friday, Jan 28 at 7pm (5pm visitation) at Claybar Funeral Home in Orange. Billie will be buried alongside her husband Robert Murray Wood (deceased 2004) in the Arlington National Cemetery

Billie Ann (Moore) Wood was born in Greensboro, NC on June 9, 1925. She had no brothers or sisters. She was raised in a big house in Greensboro with her Mom (Willie Mae Munday), grandfather, grandmother and several aunts and an uncle. Her... View Obituary & Service Information

The family of Billie Ann Wood created this Life Tributes page to make it easy to share your memories.

Send flowers to the Wood family.