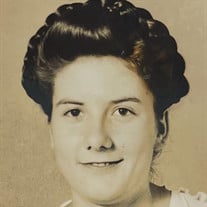 Betty Lou Perry, 90, of Orange, passed away on May 17, 2021, in Beaumont. Graveside services will be 2:00 p.m., Sunday, May 30, 2021, with burial to follow at Winfree Cemetery in Orange. Officiating will be Pastor Kevin Brown. Visitation will begin prior to the graveside service at 1:30 p.m., at Winfree Cemetery. Born in Brewer Community, Orange, Texas, on February 3, 1931, she was the daughter of John Daniel Brewer and Jimmie Lew (Winfree) Brewer. Betty was a faithful member of Mauriceville Baptist Church for a number of years. She graduated from Mauriceville High School in 1948. Betty worked for the Orange National Bank and the Levingston Ship Building in Orange. After her marriage to her beloved husband Everett, she became engaged in the operations of Rice Farming in Orange until his retirement. Betty will be deeply missed by all those who came to know and love her. She was preceded in death by her parents, John Brewer and Jimmie Winfree Brewer; husband, Everett Perry; and brother, Bobby Joe Brewer. She is survived by her son, Daniel Perry of Orange; daughter-in-law, Laura Perry of Ruidoso, New Mexico; granddaughter, Sarah Perry; and sister-in-law, Peggy Brewer of Orange; along with numerous nieces. Serving as pallbearers will be Chipper Nance, Billy Stelly, Randy Hebert, Chuck Peterson, John Vance, and James Everett. Serving as honorary pallbearer is W.H. Snelson. In lieu of flowers, memorial contributions can be made to First Baptist Church of Mauriceville at 11540 Hwy 12, Orange, Texas 77630. Mrs. Perry would like it to be known that she accepted Christ as her Savior at an early age and would like her death to be an invitation to whom has not accepted Christ into their hearts to do so.

Betty Lou Perry, 90, of Orange, passed away on May 17, 2021, in Beaumont. Graveside services will be 2:00 p.m., Sunday, May 30, 2021, with burial to follow at Winfree Cemetery in Orange. Officiating will be Pastor Kevin Brown. Visitation... View Obituary & Service Information

The family of Betty Lou Perry created this Life Tributes page to make it easy to share your memories.

Send flowers to the Perry family.