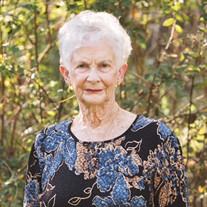 Beth Bagley Shepherd peacefully entered heaven on March 22, 2021 just 4 days after her 88th birthday surrounded by her loving family. Born in Nacogdoches, TX to the late Ross and Evalena Bagley, she was the youngest in a family of six. In 1942 during World War II, the family moved to Orange, TX living in the Riverside neighborhood. Beth accepted Christ as her Savior as a teenager at Cove Baptist Church, where she continued to attend services until 1981. Beth graduated from Stark High School in 1950, after serving as the President of the Bengal Guards during her senior year. Beth worked at DuPont where she met and married the late D.T. “Shep” Shepherd in 1954. Beth returned to work at Firestone Tire and Rubber Company in 1966 and retired 24 years later. Beth often said that “the best years of her life” were after she retired, when she and Shep started working out at the DERA Fitness Center, walking about 6 miles almost every day and biking throughout Orange, TX. Another major highlight of her retirement years were the incredible times that she and Shep spent with their two grandsons. They enjoyed camping, fishing and water skiing at Mill Creek and snow-skiing in New Mexico and Colorado. Beth is preceded in death by Shep, her husband of 56 years, parents, a sister and a brother. Left behind to cherish her memory are her son, Michael Shepherd of Albuquerque, NM; daughter, Dana (James “Buck” Roberts), and her sister, Martha Hall, of Orange, TX. Beth’s pride and joy were her two surviving grandsons Justin Roberts (Mary-Pat Moyer) and Jacob Roberts of Houston, TX. Beth is also survived by numerous nieces, nephews and their children. Beth’s family wishes to acknowledge Prescribed Home Health Inc. & Southeast Texas Hospice whose services, support and guidance allowed her to continue living at home. We also extend our appreciation to the Pastor and congregation of McDonald Memorial Baptist Church, where she attended church services with Shep for many years and continued after his passing. In lieu of flowers, the family kindly ask that memorial contributions be directed to McDonald Memorial Baptist Church at 2015 Sims St., Orange, TX 77630. Funeral services will be 2:00 p.m., Saturday, March 27, 2021, at Claybar Funeral Home in Orange, TX. Officiating will be Brother Thomas Anthony and Brother Jeff Bell. Burial will follow at Orange Forest Lawn Cemetery in West Orange, TX. Visitation will begin prior to the funeral service, beginning at 1:00 p.m. at Claybar Funeral Home in Orange, TX. Serving as pallbearers will be James “Buck” Roberts, Justin Roberts, Jacob Roberts, Anthony “Tony” Celestine, George Williams, and Jesse Ayala. Serving as honorary pallbearers will be Clay Rawls, James Bevan, Bill Dineen, Cole Hillebrandt, Steven Mazzola, and Adam Mazzola.

Beth Bagley Shepherd peacefully entered heaven on March 22, 2021 just 4 days after her 88th birthday surrounded by her loving family. Born in Nacogdoches, TX to the late Ross and Evalena Bagley, she was the youngest in a family of six. In 1942... View Obituary & Service Information

The family of Beth Bagley Shepherd created this Life Tributes page to make it easy to share your memories.

Send flowers to the Shepherd family.