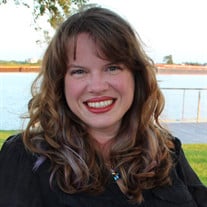 April Angela Henderson, 47, of Orange, passed away on September 22, 2021, in Port Arthur. A memorial service for April will be held at 11:00 a.m., Monday, September 27, 2021 at Claybar Funeral Home in Orange. Visitation will begin at 9:00 a.m., prior to the memorial service at Claybar Funeral Home in Orange. Born in Fort Knox, Kentucky, on June 14, 1974, she was the daughter of Gilton Lamar Brown and Cathy Ann (Griffies) Brown. April had a huge heart, a kind-hearted spirit and often volunteered her time to help anyone who was in need. She spent her lifetime filling everyone’s cup and making sure they felt loved and cherished. She was a loving wife and an amazing mother and continuously put her family first. April was a social butterfly, loving the company of others and making friends with everyone she met. She earned a Masters in Sociology and went on to be the head of the Sociology Department at Lamar State College in Orange, forming many valuble and special relationships with her coworkers and students. April was the best at delegating and giving directions, and was the best party hostess around. She loved traveling and took numerous trips around the world to study abroad. April left an impact on all those she met and will be deeply missed by all those who came to know and love her. She was preceded in death by her father, Gilton Brown; brother, Jesse Brown; sister, Rachel Brown; grandparents, Mary Alice and Peewee Brown and Joe Griffies; and aunt, Becky Brown. Those left to cherish her memory are her loving husband of 22 years, Raymond Henderson; mother, Cathy Brown; grandmother, Nellie Griffies; children, Trea Henderson and wife Tabitha of Texas City, Kirstin Henderson of Orange, Payton Brown of Orange, Jaelynn Brown of Orange and Rachel Henderson of Orange; grandchildren, Kai Nguyen, Parker Moses and Nolan Henderson; brother, Travis Brown; aunt, Rhonda Brown; niece and nephews, Cameron Brown, Kayla Bertrand, Caleb Brown, Cade Brown and Karlie Brown; along with numerous other loving family, friends and colleagues.

The family of April Angela Henderson created this Life Tributes page to make it easy to share your memories.

April Angela Henderson, 47, of Orange, passed away on September...

Send flowers to the Henderson family.